Jesus Came for the Embarrassments 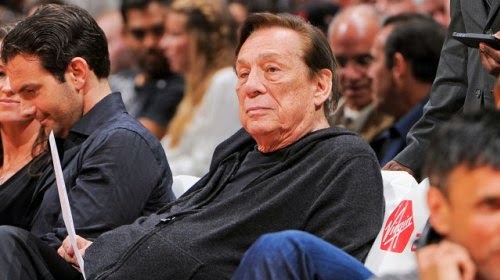 Donald Sterling, the owner of the Los Angeles Clippers (NBA) was allegedly recorded saying some pretty awful things to his girlfriend about how she shouldn’t be associating with black people and that he’d prefer it if she didn’t “bring them to [his] games.” In one sense, there’s a lot to say about this issue—legal ramifications, free speech, player reaction, possible sanctions, etc. In another sense, though, there’s almost nothing left to say. On Grantland.com this morning, Charles P. Pierce writes that “by now, half the world has already weighed in, including the coach of [Sterling’s] team, the commissioner of the National Basketball Association, LeBron James, and the president of the United States. All of them agree—as does any advanced carbon-based life form—that if the recording is authentic, the comments show that Sterling is undeniably racist, undeniably revolting, and undeniably rooted in the mind of a man who would have to yield his moral pride of place to algae.”

It seems to me, though, that there is at least one thing left to say, one thing that I’ve not heard amidst the talking heads, one thing that’s being drowned out by the outrage: I’m not all that different than Donald Sterling.

To frame our discussion, let’s use a tweet from ESPN.com’s NBA analyst Kevin Pelton, who wrote this on Saturday:

@kpelton: Important Sterling takeaway: If it's so hard to get rid of an embarrassing owner, the vetting process better be airtight.

What Pelton is referring to here is the vetting process done by the NBA and other owners before giving a prospective owner the opportunity to buy into their most exclusive of clubs. There have been many calls for the NBA to “force” Sterling to sell the Clippers, but there doesn’t seem to be any kind of precedent—or legal recourse—to make that happen. Pelton suggests that if kicking an embarrassment out is impossible, the league should make extra sure that they don’t let embarrassments in in the first place.

Here’s the pertinent fact for our discussion: We are all embarrassments!

Too often, we think of Christianity as an NBA-like exclusive club from which we’d like to keep potential embarrassments. When someone on the inside has a public “fall from grace,” we wonder aloud to each other if they were ever truly members in the first place. We keep our vetting process airtight, praying that our club avoid embarrassment.

What if Jesus had sentiments similar to those Pelton expressed? In Part 13 of his Romans sermon series, Pastor Tullian asked this question. “If he’s going to be such an embarrassment,” Jesus might say, “I’ve got to make sure my vetting process is airtight.”

If Jesus had an NBA-style vetting process—designed to keep the Donald Sterlings of the world out—we’d all be barred from entry. We might not be racists, but if we look closely enough at our feelings, motivations, and most closely-guarded secrets, Pierce’s description of “a man who would have to yield his moral pride of place to algae” might fit a little too well for our liking.

We need a God who, in Christ, does not vet. We need a God who knows us to be the needy, prideful, prejudiced, self-glorifying Donald Sterling people that we are, and who comes to us in our need. We need a God who doesn’t wait for us to clean up our act. Donald Sterling has proven himself an enemy of the NBA, and the NBA is going to do all it can to punish him for it. Jesus Christ, on the other hand, was sent on a mission specifically to rescue his enemies (Romans 5:10).

It might be fair for Donald Sterling to lose his NBA team. That’s for lawyers to decide. We need a God who is better than fair; in fact, a fair God leads inexorably to our destruction. We need a God of mercy. And in Christ, the rescuer of enemies, we have one.
Posted by Nick Lannon at 2:24 PM