We Run Out, Jesus Runs In 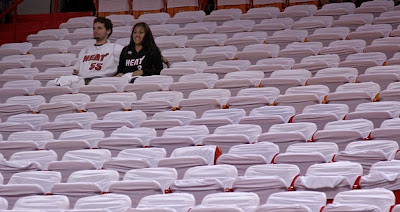 The Heat have won the NBA Championship. Everyone in South Florida is on cloud nine.  An ESPN personality (the Miami-resident Gonzalo Le Batard) told all the “haters” who thought the Heat might lose to “go back to your rathole.” Champagne has been consumed and victory parties and parades have been attended. All is right with the Heat-iverse.

How quickly we all forget.

With twenty-four seconds left in Game 6 (with the San Antonio Spurs holding the 3-2 series lead), the Heat trailed by five points, and things…well, things looked bleak.  There’s something about that moment, though, that will be remembered just as clearly as the Miami three-pointers, the San Antonio missed free throws, and the eventual Heat victory: it’s the image of Miami fans, streaming for the exits.

The best part (at least for the pundits the next morning) was that, after the game went into an improbable overtime, the abandoning fans tried to get back into the arena, and were barred from doing so.

It’s interesting to note the human movement at the end of regulation and the beginning of overtime: when the team seemed sure to lose, the people moved away, literally leaving the arena. When the team looked like it might win, they came streaming back. And two days later, when they actually did win, everyone pretended that no one had ever left, and the arena remained packed for the post-game celebration.

This is what we humans do. We are desperate to associate with winners, and terrified that we’ll be associated with losers. This is true in high school cafeterias, high powered board rooms, NBA arenas, and even in church pews. We want winners around us, and we shield ourselves (always politely, of course!) from losers.

Jesus moves the other way.

Our Savior would have been coming in to the arena as the clock seemed to click to zero on the Heat’s defeat in their second Finals in three years. Jesus showed over and over again that his life’s work was to associate with losers. The most common insult sent Christ’s way was “He has gone to be the guest of a sinner” (e.g. Luke 19:7). St. Paul knew the power of Christ’s habit: “You see, at just the right time, when we were still powerless, Christ died for the ungodly. Very rarely will anyone die for a righteous person, though for a good person someone might possibly dare to die. But God demonstrates his own love for us in this: While we were still sinners, Christ died for us” (Romans 5:6-8).

In common parlance: Jesus came for losers. People hardly ever give their all for anyone, but for a real winner, someone might give everything up. God, though, shows his love in one special way: while we were losers, he sent his son for us.

Jesus went repeatedly to the down-and-out, the leper, the demon-possessed, the sick, and even the dead. The movement of Jesus’ life, death, and resurrection is toward overwhelmed losers like you and me…radically different than what we expect, and radically better than what we deserve.
Posted by Nick Lannon at 11:32 AM