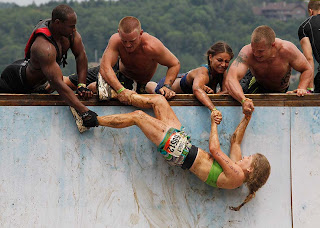 There’s an article in the June 3 Sports Illustrated (by Austin Murphy) that describes the recent “endurance running boom.” Participation in marathons, half-marathons, tough-mudders, and other distance races has grown significantly, but perhaps not in the way you might think: It’s not that there are more serious runners, it’s that less serious runners are coming out for these events in droves.

To stand at the finish line [of the Zappo's.com Rock 'n' Roll Las Vega Half-Marathon] is to know that you, Gut-Hanging-Over-Your-Shorts Guy, can definitely do it. There was no shortage of plodders and walkers on the Strip, acolytes of John Bingham, a.k.a. the Penguin, author of An Accidental Athlete (a memoir of taking up running at age 43) and self-described “spokesman for the slow-running movement.” His mantra: The miracle isn’t that I finished. The miracle is that I had the courage to start.

Such bromides had long provoked sneers from running snobs who believed that if you couldn’t finish a marathon in, say, 3½ hours, you had no business taking the start. Here we arrive at the crux of today’s Endurance Renaissance. In the decadeslong battle between the Penguins and the sinewy, 45-beats-per-minute-resting-heart-rate, front-of-the-pack Serious Runners, the Penguins have won a decisive victory. They’ve done this by uncoupling performance from identity: You don’t need to be fast to be considered an endurance athlete.

Did you hear that?They’ve uncoupled performance from identity! Those four words should hang over the door of every church and be emblazoned on the bathroom mirror of every Christian. Uncouple performance from identity.The reason that participation in these endurance runs has increased so significantly is that race organizers have successfully convinced the runners that the race isn’t really about how well they do. Usually, it’s for charity, for community spirit, or just for fun. When someone actually believes that their performance isn’t going to be judged at the end of the day, they’ll jump into the event with both feet.

Rob Klingensmith, vice president of media and marketing at the race-technology company ACTIVE Network Inc, “distinguishes between ‘competers’ and ‘completers.’ Today’s race fields have far more of the latter.” Sadly, churches are still packed with the former. Christians, in the main, have convinced themselves that they need to be “competers.” We train, we fast, and we discipline ourselves (all good things!) not really, as we loudly claim, out of devotion or obedience but because we’re terrified that God (or some sinewy, 45-minute-quiet-time-having, front-of-the-pack Serious Christian) will note our fraudulent presence, and kick us out of the race.

Christians ought to be “completers.” After all, don’t we live our lives under a banner that reads “It is finished?” Wasn’t that Jesus’ final pronouncement from the cross? If we can show up to the starting line knowing that the race is already won, we are free to be Gut-Hanging-Over-Your-Shorts Guy (in other words, living under the weight of the gap between who we are and who we ought to be) knowing that Christ is our chiseled physique. St. Paul said that if anyone could have boasted in their godly work-out, it was him (Philippians 3:5-6). He was the best “competer.” But he counted all that effort, all that striving, all that competing, as rubbish in the face of the glory and perfection of Jesus Christ. He realized that, compared to Christ, he was Gut-Hanging-Over-Your-Shorts Guy, but that, because of Christ’s completed work on the cross, he was the picture of spiritual fitness.

The Good News is God’s final announcement that our need to be competers has been overcome in Christ, and we can forever rest, for his work is complete.
Posted by Nick Lannon at 4:25 PM