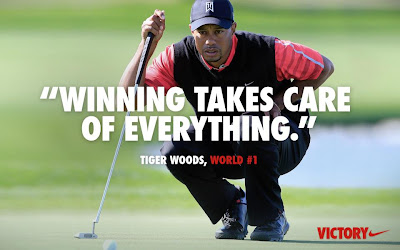 Tiger Woods' new ad campaign (or, more accurately, Nike's new ad campaign featuring Tiger Woods) is making the rounds. Featuring Woods staring down a put, the tagline is "Winning Takes Care of Everything," a quote attributed to "Tiger Woods, World #1." There has been much debate about the taste level of this ad, seeing as how Tiger Woods remains a divorcee with less than full custody of his children. Has "everything" really been taken care of? Is this an appropriate message to be sending to children?

The great Gerhard Forde (via the greater Martin Luther) talked about this idea, that victory heals all wounds, in his seminal On Being a Theologian of the Cross. Here's a taste:


Indeed, so seductive has the exiled soul myth been throughout history that the biblical story itself has been taken into captivity by it. The biblical story of the fall has tended to become a variation on the theme of the exiled soul. The unbiblical notion of a fall is already a clue to that. Adam originally pure in soul, either by nature or by the added gift of grace was tempted by baser lusts and "fell," losing grace and drawing all his progeny with him into a "mass of perdition." Reparation must be made, grace restored, and purging carried out so that return to glory is possible. The cross, of course, can be quite neatly assimilated into the story as the reparation that makes the return possible. And there we have a tightly woven theology of glory! (p. 6)

Tiger Woods was nothing if not an "exiled soul" (Forde, it should be noted, takes this chilling term from the philosopher Paul Ricoeur). Reparation needed to be made, and the Nike ad claims that "winning" was the route. Forde's claim is that Christianity all too often uses this same "exiled soul" story (he calls it "the glory story") and simply puts the cross in place of victories on the golf course. Still, though, it is "success," in one form or another, that is required for us to regain our former stature.

Woods' ad posits a thing that you can do to regain your purity: win. Christianity, as it is often practiced, posits something, too: word hard, pray hard, be righteous, and you can regain that close relationship with God that your sinful life cost you. On the golf course, a theology of glory can work in the short term: win, and the accolades will come back. The money will come back. The sponsors will come back. Even the beautiful women will come back. But where your "exiled soul" is concerned? It is only the victory (ironically, through death) of another, freely given to you, that can offer new life.

Tiger Woods' life isn't new...it's merely buffed clean until new cracks appear (or until he starts losing again). We require something more permanent, something that will give us peace. Admonition ("Go win!") won't do it. Only a gift will do. "Thanks be to God, who delivers me through Jesus Christ our Lord!" (Romans 7:25)
Posted by Nick Lannon at 8:30 AM