Thank You For Not Coaching 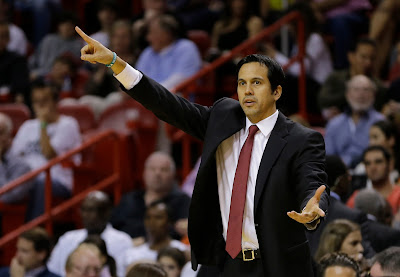 People are selfish. Christians are people. That's an interpretation of something my friend Aaron Zimmerman said once. He said that people are bad, and that's true...selfishness is just one of the myriad ways in which we're bad. That's why it's noteworthy when someone does something legitimately unselfish; when someone does something for someone else with no regard for themselves, they usually end up on magazine covers and talk shows. Such behavior runs counter to our nature, and so it stands out.

That's why what happened at the end of a recent Miami Heat game was so remarkable. In a world of prove-your-worth-to-the-world machismo and selfishness, Heat head coach Erik Spoelstra did something almost unprecedented: he took his hands off the controls. In a critical moment with time running out and his team trailing, Spoelstra elected not to call a timeout to diagram a play. He decided to let his players "run free" and decide the game. Here's ESPN's Henry Abbott on the decision:

This is big. To understand how big, you have to understand how impossibly tough it is for coaches to come around to the idea that the best thing for their team might be ... less coaching.

By the time you have put in the insane hours that it takes to become an NBA head coach, often generally at the expense of a quality family life or anything else that matters much, you have to really be attached to something.

For many coaches, the thing they're attached to is the idea of calling the shots. Which is most fun and momentous in late-game timeouts. Watch any sports movie ... that's when coaches coach. Those are the moments that make all those sacrifices worth it.

On top of that, NBA coaches are a group of men who are generally allergic to the idea of "letting things run their course." Other than a super-empowered, can't-be-fired Phil Jackson here or there, taking the hands off the controls is not a brand of wisdom that resonates in this pack of alpha dogs. These are the high priests of effort and determination and focus and doing things. Unless you're extremely driven and among the most freaky of control freaks, you're unlikely to make it to the top of the coaching pile while believing in the power of not doing things.

If Spoelstra calls the timeout and his play works, he's a genius. If his play fails, the players likely get the blame. What he did in not calling the timeout was take the risk onto himself and allow his players to take the credit (and yes, I see the irony here: he still ends up getting the credit!).

We want desperately to take credit, both as people in general and as Christians in particular. Many Christians loudly proclaim that they are saved by the grace of Jesus Christ...but that they had to choose to accept it. This would be like Erik Spoelstra saying, "All the credit goes to the players...but they do have to run the sets that I design."

Spoelstra's ability to let go would be a great model for us all...if we could do it. Unfortunately, God usually has to wrest control away from us. Fortunately, He does just that. Our salvation is accomplished by God's action: he comes to us, opens our eyes to our need, and then announces that our needs have been met in Christ. We are addicted to doing. In Christ, the work is done.
Posted by Nick Lannon at 8:30 AM