Bad Preacher: Controlling God in There Will Be Blood 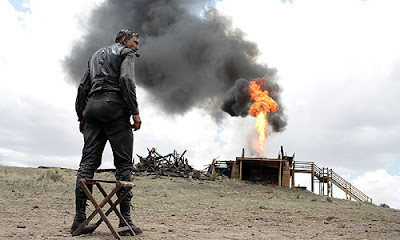 In Paul Thomas Anderson's 2007 oil epic There Will Be Blood, no character can stand in the way of Daniel Day-Lewis' Daniel Plainview. Several try, but they are mowed down by his titanic force of personality and will. Plainview literally seethes in every single scene in the film, even when sitting quietly by the campfire or going for a dip in the ocean. Day-Lewis' performance is so assured and immersive, his Oscar was a foregone conclusion.

Because of Plainview's (and Day-Lewis') dominance of the screen and the film, almost none of the other performances register, including Paul Dano's strange turn as both Paul and Eli Sunday. Paul shows up in an early scene, selling information that his father's ranch has oil on it, and is then never heard from again. Eli, however, is Plainview's main antagonist (although Plainview himself can only honestly be called an antagonist), a fire-and-brimstone-style preacher who wants to make sure that the church gets a piece of Plainview's oil profits.

Unfortunately for Eli, he is not the landowner, and Plainview is able to swindle the naive elder Sunday out of his ranch.  Here's Eli confronting his father about his stupidity:


In another scene, Plainview refuses to let Eli bless the new derrick, which leads (according to Eli) to the death of a worker and an accident involving Plainview's own son.

These two scenes go together to illustrate Eli Sunday's view of God: basically, Eli thinks that we can control God. First of all, he thinks that his blessing can compel God's protective action. No blessing, no protection. Either way, it's Eli who's in control. Secondly, he tells his father that God won't save stupid people. Again, it's people who control their salvation, not God. Smart, saved. Stupid, lost.

All too often, we think about God in the terms that Eli does. We imagine that he is beholden to us, either to our prayer life, to our faithfulness, or to our bidding. In fact (and this is good news), God operates outside of us, and despite us, saving us in our stupidity, and saving the world despite our attempts to destroy it.
Posted by Nick Lannon at 9:00 AM