An Inspirational Speech: Chuck Pagano and The Power of The Word 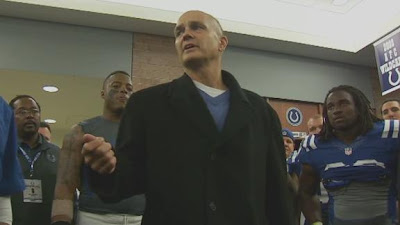 Here's Colts head coach Chuck Pagano in the locker room after his team won on Sunday. Pagano has been unable to coach the team this season, having been diagnosed with leukemia and undergoing chemotherapy:


My first response to this video was, "Really?  People are really inspired by the 'Rah rah I'm gonna beat this and we're gonna win' stuff?" I was all prepared to compose a post about that old sports saying that Father Time is undefeated. In the sports world, it's used to call attention to the inevitability of players aging and declining in ability. It happens even to the greatest athletes. There comes a point when they just can't do it anymore. Father Time is undefeated.

We might say the same thing of ourselves: Father Time is undefeated. We can never escape our ultimate fate; not even the best among us, including Chuck Pagano. We might extend our time horizon longer than anyone expected us to, but Father Time is, and will remain, undefeated.

So that's what I was going to write.

But then I watched SportsCenter. And Around the Horn. And Pardon the Interruption. And I listened to the B.S. Report. And people would not stop talking about Pagano's inspirational speech. Sal Iacono (of Jimmy Kimmel Live) told Bill Simmons on the B.S. Report that gamblers should be notified when a sick coach is going to give a speech before a game, because there's no way that team's losing. That's when I remembered that some words have power.

I'm still dubious about coaching speeches having measurable effect on the outcome of games, even speeches like this one:

Perhaps Chuck Pagano's moving speech is but a pale echo of the true Powerful Words, but I think we can all be glad for an echo that reminds us of the real thing.
Posted by Nick Lannon at 8:30 AM