The Scaled Law of Oscar Pistorius The inspirational story of Oscar Pistorius has taken an interesting turn. For years, it seemed that "inspirational" was a legal part of Pistorius' name, included as a required element of every sentence in which he was mentioned. Pistorius is a double-amputee sprinter who runs on carbon-fiber "blades" that replace the lower half of both of his legs. For the first time, last month, such a competitor was allowed to compete at the Olympic Games. This didn't occur with no fuss; there was at least some question about whether or not the blades gave Pistorius a competitive advantage over runners forced to use their own, God-given, legs.

Pistorius acquitted himself well at the games, but didn't make the final in his only individual event, the 400 meter dash.  He seemed to say all the right things during each of his (seemingly several hundred) interviews, always remarking that he "happy just to be" there, and honored and humbled by the attention he was getting. For Pistorius, it seemed that it wasn't about winning.

Every four years, a month after the Olympics, the Paralympics takes place in all the same stadia. To same extent that he was an inspirational story at the able-bodied Olympics, Pistorius has been a dominating force at the Parlympics, winning the 100, 200, and 400 at the Beijing Games in 2008. The same was expected this time around, no doubt due to the fact that Pistorius had qualified (well, sort of) to compete against able-bodied athletes. On Sunday, Pistorius was beaten by Brazil's Alan Oliveira in the 200 meter dash, ending an almost unparalleled dominance. Check out this excerpt from the Associate Press story reposted on ESPN.com:

The "Blade Runner" had never been beaten over 200 meters until Brazilian sprinter Alan Oliveira came storming down the home straight to win by 0.07 seconds and dethrone the icon of the Paralympics. 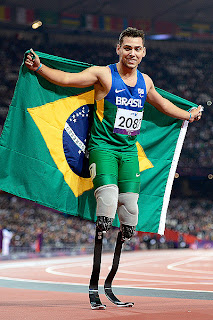 Having won his own legal battle to compete wearing carbon-fiber blades alongside able-bodied rivals, Pistorius suggested that Oliveira ran with longer prosthetics than should be allowed.

Oliveira won in 21.45 seconds after overtaking Pistorius at the line at Olympic Stadium in front of a capacity 80,000-strong crowd.

"Not taking away from Alan's performance -- he's a great athlete -- but these guys are a lot taller and you can't compete (with the) stride length," Pistorius said in a broadcast interview. "You saw how far he came back. We aren't racing a fair race. I gave it my best. The IPC (International Paralympic Committee) have their regulations. The regulations (allow) that athletes can make themselves unbelievably high.

"We've tried to address the issue with them in the weeks up to this and it's just been falling on deaf ears."

For Pistorius, it is "ridiculous" that Oliveira could win after being eight meters adrift at the 100-meter mark.

Pistorius has since apologized for the timing of his comments, though not for their content.
I, for one, am glad that Oscar Pistorius has revealed himself to be a human being, rather than an humanoid "inspirational story." He's done what we all do: apply a scaled law to ourselves, and the full law to others.  A common human refrain is, "I'm not perfect, but..." It sounds awful put into words in the way that Pistorius did, but we all do it, all the time. Our struggle to self-justify finds its most habitual form (we know of course, that we cannot completely justify ourselves) in the desire to at least be better than one other person. This is the theological version of running from the bear: you only have to be faster than one of the other people trying to get away.
Until we can start seeing the law as applying fully in all cases, and doing so to us, we'll always find ways to exempt ourselves (after all, don't we deserve it?) and to thereby put a band-aid on the gaping wound of our human need.
Posted by Nick Lannon at 8:30 AM