Law and Grace in Jiro Dreams of Sushi 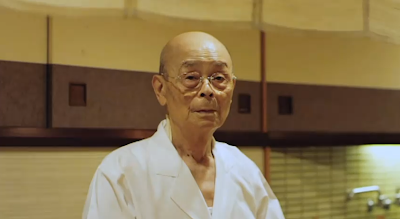 There's not really a whole lot to David Gelb's 2011 documentary Jiro Dreams of Sushi...it mostly consists of lovingly photographed sushi. Jiro Ono, the film's subject, is a master sushi chef who operates a 10-seat restaurant in a Tokyo subway station, which doesn't sound auspicious until you add that it's a Michelin three-star (the highest possible rating) rated restaurant at which meals begin at 30,000 yen ($300) and reservations must be made a month in advance.  A food critic interviewed in the film says that, based on time (your meal might take you fifteen minutes to eat, as Jiro frowns upon relaxation and is given to staring sullenly at his customers while they eat), Jiro's is the most expensive restaurant in the world.

One interesting dynamic in the film is Jiro's relentless pursuit of the perfect piece of sushi. He has a routine and follows it religiously every day, even so far as to board the commuter train from the same point on the platform. However, this pursuit is offset by his knowledge that actual perfection will remain out of his reach. He, and his tuna vendor (who says, "If ten tuna are for sale, only one can be the best. I buy that one.") both acknowledge that just when you think you know everything, something happens to remind you how much more there is to know, and how much more work needs to be done. This is quite reminiscent of God's law, which must always be beyond our reach (Matthew 5:48). Ironically (and graciously) it is in our acknowledgement of our failure to live up to the law, whether it be the law of perfect sushi or perfect righteousness, that enables us to do anything worthwhile at all.  In that sense, it is Jiro's realization of his shortcomings that allow his sushi to be so amazing. 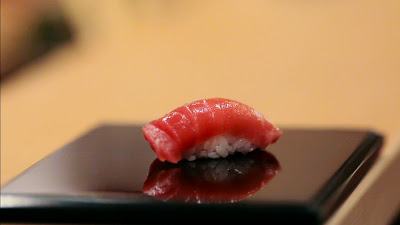 A second dynamic that bears mentioning is that between Jiro and his son and heir, Yoshikazu.  Yoshikazu remains at Jiro's restaurant as a sous chef despite being fifty years old (and despite his younger brother having gone off to open his own branch of the restaurant) because in Japan, it is expected that the elder son will remain with the father and take over his position. Yoshikazu, of course, is in the unenviable position of following in a master's footsteps. One of Jiro's former apprentices notes that when Jiro does retire, even if Yoshikazu's sushi is the equal of his father's, it will be seen as inferior...and that it will only be seen as equal if it is, in fact, twice as good. Again we come up against the face of the unyielding law. There is literally nothing Yoshikazu can do to fulfill the expectation that is placed on him. He must do what his father has (and we Christians have) done; acknowledge our weakness and pray for a miracle. In a happy postscript, it seems as though Yoshikazu may have gotten his miracle: it turns out that every time the Michelin inspectors ate at Jiro's restaurant in the first year, it was Yohikazu who made their sushi!

Count me in for a trip to Jiro's subway station (the Ginza station in Tokyo) the next (and first) time I'm in Japan, but count me out for a lifetime spent in the relentless pursuit of perfection.
Posted by Nick Lannon at 8:30 AM