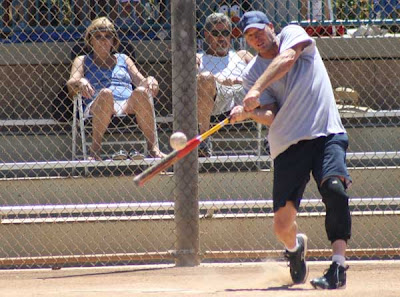 So I’m ﬁnally old enough to play in a men’s softball league. I’ve been looking forward to this for years!  I’m a proud member of a Denville 32-and-over men’s softball team…and I couldn't be happier. You should know, ﬁrst of all, that this is not a “beer league.” The guys do gather on a hill overlooking the ﬁeld and enjoy a beverage after the game, but there’s no drinking during play, and the games are pretty serious. As someone who can’t play Memory with my four-year-old without wanting to win, it’s perfect.

I’ve joined a team that’s been in existence for many years, so I’m “the new guy.” This means I get razzed
and that I bat near the end of the line-up. The guys are pretty great, though, and they don’t give me a very hard time. Of course, one of the things that they DO give me a hard time about is my job. As soon as it came out that I was a minister, that was all anyone could talk about. They’ve taken to calling me “Saint Nick.” Most of all, though, they feel like they’ve got to apologize for every curse word or oﬀ-color comment.

See, I represent the law and judgment to them. Try as I might to explain that I’m just a normal person and that I’ve heard it all before (and then some), these guys have trouble seeing me as “one of the guys.” It’s like they
imagine that I’m wearing my collar while we play! Someone will drop a ball, curse, and then turn to me and
apologize. 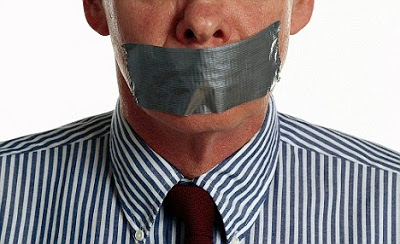 The thing is, though, that it’s not really me. It’s the church. Not YOUR church, THE church. People out in the world see the church as a judgmental institution, not as a gracious one. This is our problem…it’s a major reason people don’t come. Of course, the problem is that the church (and Christians in general) come across as ONLY judgmental. "Christianity" itself is seen as a set of behaviors (or avoided behaviors, like cussing) and one's ability to adhere to those behaviors (or avoid them) constitutes one's acceptability as a Christian. Hence my avalanche of apologies.

But judgment, of course, is just the opening salvo in our theological shock-and-awe campaign. We're shocked to find that we're sinners, but awed by the depth of love in the forgiveness offered; indeed, not simple forgiveness, but substitution! Like a Fourth of July fireworks show (San Diego 2012 excepted), the finale always dwarfs the opening. Love overshadows judgment.

I can never have a real relationship with my teammates so long as they keep apologizing to me when they swear. They see me (at least) as a judgmental surrogate, if not a judgment machine in my own right. Judgment kills love, and relationships. To be whole, we must remember the central tenet of true Christianity: love always trumps judgment, the Gospel always trumps the law, and forgiveness is always better than criticism. We’re sinners, and we’re forgiven.
Posted by Nick Lannon at 8:30 AM