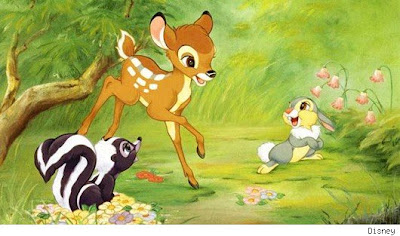 My almost-four-year-old daughter requested that we watch Bambi yesterday, and unlike my normal practice (getting stuff done around the house while she watches a movie) I sat down and watched it with her. I hadn't watched the film all the way through in a really long time, and when Bambi's mother is (SPOILERS!) shot, I found myself thinking, "Wait, there's an hour left. What happens now?"

Well, a bunch of stuff happens, but one thing that really surprised me: I knew that "man" was the bad guy in the movie (that Bambi's mom thing again), but I had no idea how bad. When Bambi's father shows him man's encampment, he explains that the deer must retreat further into the forest. The smoking fires of man are shown at a great distance, and the most prominent feature of the camp is the circling vultures overhead. The implication is clear: mankind equals death and destruction. In the next sequence, Bambi fights off a pack of a dozen seemingly rabid hunting dogs, and barely escapes a raging forest fire, both put into play by "man," whose role in the film is faceless and senseless destructor.

It reminded me of a scene in one of the FernGully films, wherein a beatific forest has been shockingly marred by a clearing with a stump in the center of it. "This is NOT natural," one of the animals exclaims. Both of these films posit humankind as the enemy of nature, not as part of it. 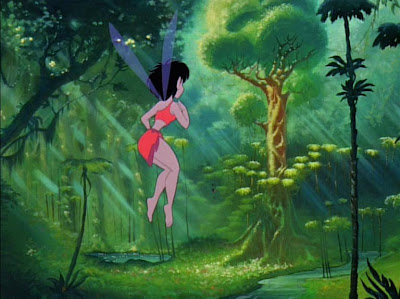 But humankind has always been part of nature. Even the native Americans, those paragons of natural harmony, killed animals, farmed the land, set fires, and cut trees. Animals fashion tools, build homes, redirect water, and hunt. Sesame Street defined "nature" as "anything not made by humans." That's not true. We make homes just like beavers do, and they're not any less "natural." There are certainly arguments that can be made against the quality (and extent) of humankind's behavior in nature, but these arguments should be made from the standpoint of human beings as part of nature, not as a Cruella deVil-style antagonist toward it, and with the knowledge that the same arguments then ought to be made about other organisms.  I mean, have you seen the insatiable appetite of the Venus flytrap?
Posted by Nick Lannon at 11:47 AM