Pulling John and Losing to Win 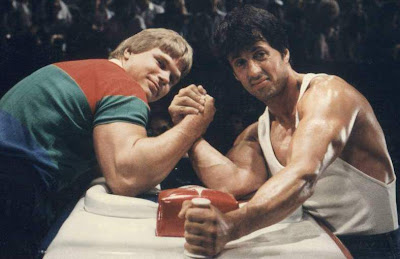 I'm addicted to documentaries; tiny ones that no one has ever heard of. Netflix Instant has been a godsend for finding my fringe documentary fix.  The last two I watched were Running the Sahara, the story of three men who, you guessed it, ran across the Sahara Desert, and Pulling John, the story of three of the premier arm wrestlers in the world.

John Brzenk (the "John" of the title) became the world arm wrestling champion in 1983 and didn't lose an arm wrestling match (a "pull") for the next 25 years.  You might recognize him from the 1987 Sylvester Stallone arm wrestling movie Over the Top (he won the part in a tournament).  Pulling John follows his wrestling (get it?) with whether or not to retire as he approaches 40.  The main story of the film, though, is the collision course of Alexey Voevoda (a demure Russian giant) and Travis Bagent (a bombastic American braggart), two young challengers to Brzenk's throne.  Both men revere Brzenk, and understand that they must each go through the other to get to Brzenk's level.

At the World Championships in 2003, Voevoda and Bagent met in the super heavyweight final.  (Brzenk is a middleweight, and, at the time, no longer regularly competed in tournaments.  It should be noted, though, that he made his name on beating super heavyweights in open weight class competition.)  In a huge upset, Bagent soundly defeated the heavily-favored Voevoda. If you're familiar with stories like this, you know what happened next: Bagent got even cockier, while Voevoda went back to Russia to work out.  It's during these Russian post-loss scenes that Voevoda begins to talk about what we might call "the theology of the cross."  He discusses losing, what it means to him, and how acceptance of the loss can bring greater strength.  At a critical point, one of his coaches says, "If you're strong, losing can make you stronger."

Now, it's dangerous to say that the theology of the cross "works," since it "working" entails something like a death.  But it is true that it is only from deaths that new lives are born.  Voevoda begins to know himself as a loser (lieterally...I would never call someone as strong as Voevoda a loser) and, through that knowledge, gains strength.  When he meets Bagent again, with the winner to face Brzenk, it's not close.

Luther said that the cross was the end of us.  Losing to Bagent was the end of the "invincible" Alexey Voevoda.  A new life was created.  It was this new creation that dominated Bagent and moved on to face Brzenk.  Track down the movie, because what happened next is...well, over the top.