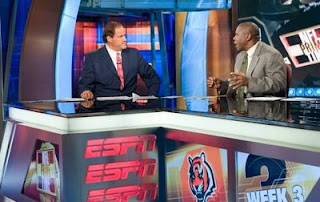 The Power of Positive Thinking was first published in 1952, and spent 186 consecutive weeks on the New York Times bestseller list.  It has sold, according to some estimates, over 5 million copies, and has spawned a horde of copies, including books like The Secret and Your Best Life Now.  More than that, though, it has created a place for itself (and its thesis) in the common consciousness, long after its author's name (Norman Vincent Peale) has begun to fade from memory.  This morning, though, I heard Peale's name referenced in a most unusual place: On The Blitz, a segment of ESPN's flagship program, SportsCenter.  Hosted by analysts Chris Berman (a long-time sportswriter and TV personality) and Tom Jackson (a former NFL player), The Blitz offers highlights and analysis of each Sunday's NFL contests.  As you might imagine, for several weeks, the show has been headlined by the mind-blowing exploits of Tim Tebow and his Denver Broncos.

In his postgame comments (after improbably leading the Broncos to 10 points in the final two minutes of regulation and a field goal in overtime to beat the vaunted defense of the Chicago Bears), Tebow credited the "belief" that his team had in itself.  Each player was said to "believe" in all the other players and to "trust" that they were never out of it, even as victory seemed more and more remote.  Berman, reacting to Tebow's and his teammates' comments, said something like, "It reminds you of Dr. Norman Vincent Peale...it's still true." 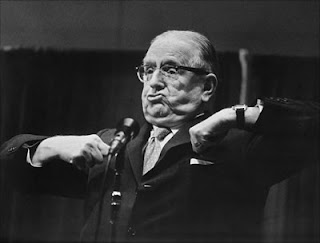 Is it?  Is there power in positive thinking?  I've argued elsewhere that there isn't, or at least not substantive power.  I thought for a second, watching Berman's broadcast, that maybe it's true in team sports in a way that it isn't for an individual.  Confidence before a game can sometimes lead to a victory, right?  But isn't it true that, as the sample size approaches infinity, talent will win out?  Tim Tebow's fourth quarter heroics could be attributable to his option- and power-rushing style wearing down his opponents, rendering them impotent to stop him late in games.  As Tebow himself is quick to point out, Denver's defense has been playing wonderfully, allowing just 102 points in their last six games (all wins...that's 17 points per contest, and 56 of those points came in TWO of those games, against the Raiders and Vikings), allowing Tebow and the offense to remain close as the games near their end.

The idea that confidence can lead to (or even equal) success is a powerful one, and one with significant cultural cache.  This is because it allows us to feel responsible...or, better, powerful...and secure.  We often blame others when we fail, but we want the credit when we win.  Even more prevalent is the fear of powerlessness.  If the Broncos won or lost based on factors beyond their control...that's a terrifying situation. Though we would prefer to be able to blame outside forces for our failures, it's a trade we're willing to make to not only be able to take credit for our successes and to shield ourselves from the effect of factors beyond us. 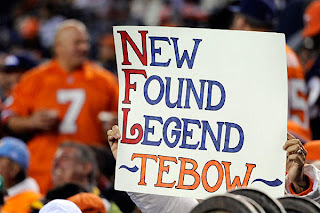 I'd be more likely to believe Tebow if he said that God was causing the Broncos to win that I am to believe his claim that the victories come because his teammates "believe" in one another.  But I have the easiest time believing that the Broncos win because, when it comes to crunch time, they are better prepared, more efficient football players than their opponents.  I can only live in my own skin, and my own experiences are the only ones I can see from the inside (note well: this kind of anecdotal evidence is what drives me so crazy when people try to substantiate claims of the power of positive thinking), and I have found that positive thinking is not only lacking in efficacy, it lacks existence itself.  I can't choose to think positively; that's pretending.  When Jim Carrey asks his son to revoke his birthday wish in Liar Liar, he finds that the magic didn't work.  He asks his son what happened, and the kid says, "Yesterday, when I wished that you couldn't lie, I really meant it.  Today, when I took it back, I only did it because you told me to."  Carrey responds:  "Let's do this again, and this time...MEAN IT."

We can see how patently ridiculous this is.  You can't mean something you don't mean.  You can't be positive about something that you're not positive about.  Soon enough, the Broncos will lose a football game, and it won't mean that they've stopped believing in each other, and it won't prove that Norman Vincent Peale was wrong, any more than their winning steak proves that he was right.
Posted by Nick Lannon at 11:23 AM