Thoughts on Dumb and Dumber

Is there a perfect movie? In my sermon last Sunday, I suggested that the perfect movie is A Few Good Men. I've said that the perfect comedy is Election, as I've written in this space. However, Dumb and Dumber occupies a special place in my heart. I know that it's got a little bit of a rep for being, er...dumb, but Jim Carrey (with the stunning exception of Eternal Sunshine of the Spotless Mind) has never been better. This film boasts some of the classic-est lines in the history of the world: 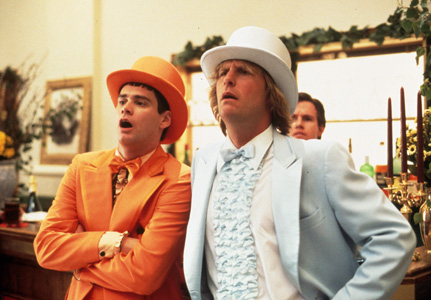 "What are the chances of a guy like you and a girl like me ending up together?"
"Not good."
"Not good...like...one out of a hundred?"
"More like one out of a million."
"So..you're telling me there's a chance! YEAH!"

And maybe best of all:

"Man, you are one pathetic loser! No offense."