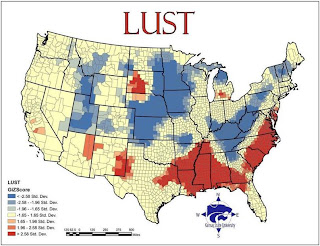 You might think so, according to the picture at left. Here is a study by Kansas State University that claims to distribute the prevalence of the seven "deadly" sins geographically in the United States. My sister, the brilliant Emily Lannon, suggests a different graph, pictured below and right. Be sure to check out all of the sins and their distributions. 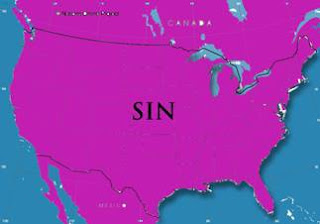 It certainly calls the question: Is sin an act of the will, or is it the muck in which we find ourselves? If I move to Utah, will I lust less? Do people in certain areas (usually rural ones) have more will power? Fewer temptations? Or is sin really measurable? Isn't this the exact point that Jesus makes in the Sermon on the Mount? He might well have said, "You have heard it said that people in L.A. are the greediest in all the land. But I say to you, look deeper in the hearts of those North Dakotans!" Apparently, at least where lust is concerned, Mississippians wear it on their sleeves...