Who Can Give to the Church? 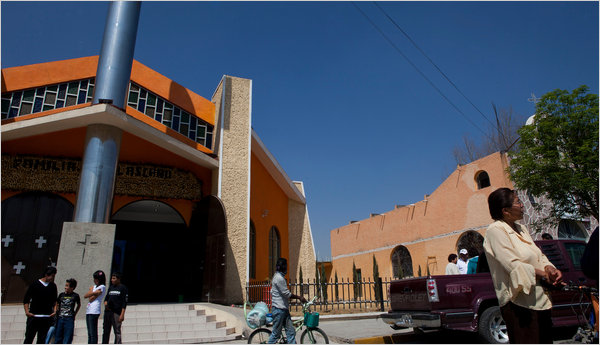 A very interesting article was recently posted on NYTimes.com about Mexican churches re-evaluating their donors. The church in the picture is in Pachuca, Mexico, and features a plaque thanking the donor who made its building possible, Heriberto Lazcano Lazcano. The catch is that Lazcano is also known as "The Executioner," and is the head of a "ruthless crime syndicate" called the Zetas. The question Mexican churches are asking is: "Should we be taking money from such people?" My good friend Jacob posted about this article on the popular (and recommended) Mockingbird blog, and it has sparked some mild blog-troversy...

Some comments:
"This long history of a cozy, "non-judgmental", relationships with the power elite, back to the conquistadors, is exactly why the RC church is so hated by a large segment of the population in Mexico and throughout Latin America."
"If money earned impurely is given to the Church as a form of atonement to do good, then I think this has merit. The money has to go somewhere after it leads the criminal's hand so it might do some good."
"A history professor of mine, who was from an aristocratic Southern family, told the story of a large group of KKK men coming into her church, in full white-robed regalia, during the offertory, and depositing a large sack of cash at the alter, then processing out. Her father, the warden, insisted that the church refuse the money and made it known why. I...think he was one hell of a Christian."
"My church was built by and has plaques dedicated to J.P. Morgan, John Noble Stern, etc. We call them bankers and buisnessmen, but the truth is one could just as equally call them criminals."
So what do you think? You can check out the entry and all the comments (including some from yours truly) HERE.
Posted by Nick Lannon at 3:44 PM