A Prayer for M. Night Shyamalan: God DOES Exist! My favorite novel of all time is A Prayer for Owen Meany, by John Irving (maybe best known as the author of The Cider House Rules or The World According to Garp, which were both made into better movies than the atrocious Simon Birch, the Meany adaptation. If fact, I can't close this parenthesis without mentioning that Birch was so atrocious that Irving refused to let the filmmakers use the name of his novel). The first words of the first chapter are:

"I am doomed to remember a boy with a wrecked voice -- not because of his voice, or because he was the smallest person I ever knew, or even because he was the instrument of my mother's death, but because he is the reason I believe in God. I am a Christian because of Owen Meany."
Makes you want to keep reading, right? I recently started reading A Prayer for Owen Meany again, probably for the fifth or sixth time, and I got to thinking about the structure of this wonderful novel. Wonderful as it is, though, I fear that not that many of those reading these words may have read it. However, there is another story that follows a similar structure, with which you may be more familiar: M. Night Shyamalan's film Signs.

In Signs, Mel Gibson plays a (probably Episcopal) minister who has lost his faith after the tragic death of his wife. He lives with his idiosyncratic family on a farm. His brother is a failed baseball player, his son has terrible asthma, and his daughter leaves half-drunk glasses of water all over the house, claiming it "tastes funny." When aliens with evil intentions invade earth and besiege Gibson's family in their farmhouse, the foibles of his family (the baseball playing, the asthma, and the drinking water) turn out to be the exact set of circumstances that are required for the family to survive the attack. This leads Gibson to recover his faith.
A Prayer for Owen Meany is like that. The seeming random and tragic events of two boys' lives conspire to prepare them perfectly for their most pivotal moment, and this leads to the narrator's belief in God. 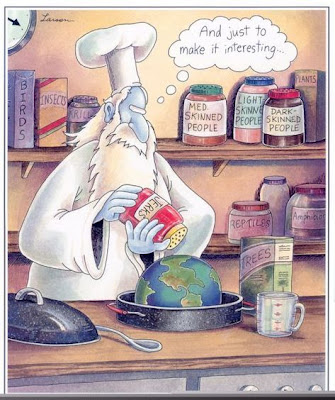 What do you think of this? In these two stories, we get the classic "things work together for good" argument of Romans 8:28, even things that don't appear, at the time, to be good. A boy's asthma, and the death of another boy's mother, are eventually shown to be for some "greater" good. It seems, though, that as pleasant as this seems, that in actual life (that is, life outside of movies and novels) we don't get to see the allegedly greater good. Sometimes, it's awfully hard to see any greater good at all.
It seems, to me at least, that Christianity comes from a different place. The narrator of A Prayer for Owen Meany even alludes to it by specifying: "...he is the reason I believe in God. I am a Christian because of Owen Meany." "A Christian" is much more specific than "a believer in God." Christians, fundamentally, believe in a God who saves. And this, finally, differentiates the God of Christianity from the God of Irving and Shyamalan. Their God saves, to be sure, but faith is only restored when the saving happens in a visible and obvious way. Their God saves temporally...ours saves eternally. It's a trade-off I'm willing to make. How 'bout you?
Posted by Nick Lannon at 9:26 AM