Robert Duvall and The Apostle 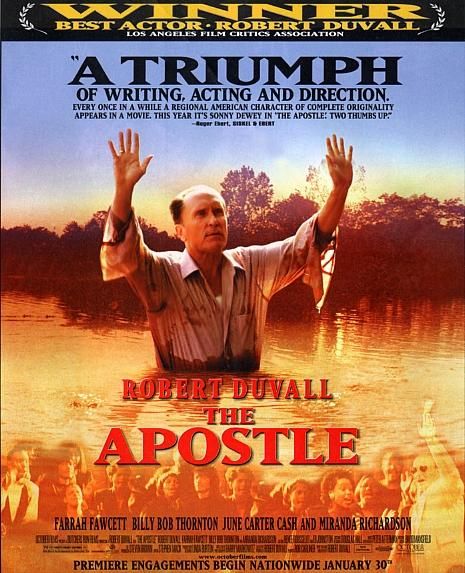 Many (if not all) of you will have heard of Robert Duvall. One of America's greatest actors, he has portrayed everyone from Tom Hagen in The Godfather to Harry Hogge in Days of Thunder, and a host of those in between. Fewer (if any) of you will have heard of Walton Goggins. Probably best known for his role as Detective Shane Vendrell on The Shield, Goggins gives such a wonderful performance in the Duvall-directed and -starring The Apostle that he threatens to overshadow such actors as Duvall, Miranda Richardson, Billy Bob Thornton and even Farrah Fawcett and June Carter Cash!

In the film, Duvall plays a Baptist minister cursed with a violent temper. In an arguably justifiable outrage, Duvall accidentally kills a man, and must go on the run from the law. He ends up in tiny Bayou Boutte, Louisiana, and goes about planting a church. One of his first congregants is Goggins' Sam. This is a story of a flawed but deeply devoted Christian, someone who is honest about his flaws but committed to the proclamation of the Gospel. It's a story about God working, as he promised, through broken vessels and jars of clay. Goggins' tearful conversion, as Duvall is being led away to prison, is one of the most powerful scenes I've ever seen. There's also a great scene wherein Duvall (and his Bible) stand up to Billy Bob Thornton (and his bulldozer)! Chock full of Southern charm, consider this the companion piece to Black Snake Moan, blogged about here. The real reason to watch this movie though, as a movie buff, is to see Walton Goggins' wonderful performance. It serves as a reminder that we've never heard of many of the greatest actors in the world. For every Brendan Fraser there are twenty Walton Gogginses. I'll take Goggins every time.
Posted by Nick Lannon at 3:02 PM