The movie I'm into more than any other right now, in the sense that I could basically watch it every night, is Hot Fuzz. Co-written and directed by Edgar Wright and co-written by and starring Simon Pegg (both of Shaun of the Dead fame), Hot Fuzz is an action/cop/buddy spoof that itself serves as a wonderful action/cop/buddy movie. Pegg plays Nicholas Angel, a go-getting London cop assigned to a sleepy country village because he's making all the other big-city cops look bad with his work ethic. Angel immediately starts to smell a rat around Sandford (the small town), as townsfolk die in mysterious accidents.
The film posits a world where evil lies just beneath a veneer of sweetness, politeness, and hospitality. Hot Fuzz is certainly not the first story to suggest this (The Stepford Wives, Invasion of the Body Snatchers, and every Rod Serling Twilight Zone episode come to mind), but it does it in a deliciously tongue-in-cheek way. If you like action/cop/buddy movies, or like to make fun of action/cop/buddy movies, then Hot Fuzz is for you.
Angel makes an interesting comment about the Law while explaining why he became a police officer: "I had to prove to myself that the law could be proper, and righteous, and for the good of humankind." Almost a quote from the Bible! Paul (the Apostle...not anyone to do with this film) would largely agree. Of course, I imagine he'd want to clarify what Nicholas Angel meant by "for the good of humankind." 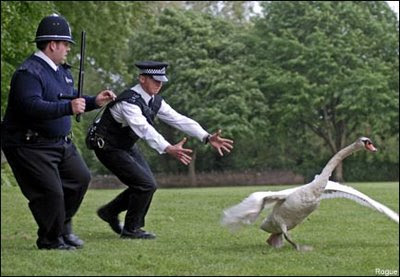 Whereas Angel seems to take the Law as a prescription for a safe and pleasant society (while defending his rounding up of VERY small time criminals, he says that "geographic location shouldn't figure into the enforcement of the law"), Paul would argue that the Law only serves to show us how short of it we're falling (e.g. the law "don't covet your neighbor's swan" doesn't actually serve to make us covet less, it only serves to show us the extent of our covetousness). So while Paul and Angel might agree that the Law is "for the good of humankind," Angel might suggest that adherence to the Law will make the world a good place for humankind to live. Paul would say that adherence to the Law is a fool's errand, and it's "goodness" comes in showing a failed humanity its need for a savior.
What say you? Do you find the most nefarious evils of the world hidden under things that look good? Or is this a movie convention, that the bad guy is always the one you least suspect? And how about the Law? Can it create the thing it requires? Or does your mom's insistence that you not take a cookie almost compel your hand toward the jar?
Posted by Nick Lannon at 1:16 PM