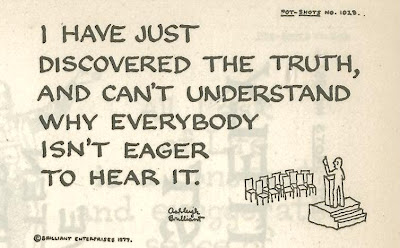 Can the news be that good if no one wants to hear it? I often find myself chuckling derisively at the preaching in churches that I see on television. "Ha!" I'll snort. "What an offensive message. No one's going to like that very much!" Then, as you might imagine, the camera pans around to reveal the masses hanging on the preacher's every word. I have no masses. Don't get me wrong, I love my congregation, and we're growing, but we didn't have to buy an arena from an NBA team, like Joel Osteen and Lakewood Church in Houston did. Why is it that preaching that some of us might consider to be bad news is so appealing to so many listeners? The answer, of course, is to be found at the core of the recent Treehouse of Horror XX.

Can you believe that this is The Simpsons' twentieth season? Astounding. In any event, each year, The Simpsons produces a Halloween episode that is required viewing, even if you're not a fan of the show itself. The Halloween special is a cultural phenomenon. This year, the episode included a vignette in which Krustyburger (the chain owned by the town's children's television star) sells what turns out to be an "infected" hamgburger. Through a production process that would have the FDA and the EPA carrying pitchforks and torches, Krustyburger puts a burger out that turns the citizens of Springfield into...of course: Zombies. Favorite line from the episode? Bartender Moe, as he's being carried off by four zombies: "If I were you, I'd wash me before I eat me."

Even after the alarm is raised people continue to eat the burgers! Finally, days after the plague starts, Bart can stand his burger-jones no longer, and risks life and limb to navigate a sea of zombies to get his hands on what appears to be the last remaining Krustyburger. He bites.

What could compel Bart to do this? To act in such a counterintuitive way? This convention is well known in slasher film: "No group of nubile teens has ever returned from that campground alive!" "Oh, I'm sure we'll be fine." Or, "This house, built on an ancient Indian burial ground has phantasmagorical blood pouring down the walls, and the realtor, a crusty old woman with one eye and a goiter, told us not to stay here." "I'm sure it's nothing to worry about." Bart's been given information that can save his life: Don't eat that burger. He does anyway. And Christians? What's with them? Why the resistance to the good news? In the end, Bart's hunger gets the best of him. His need for a burger overrides the logic of avoiding zombie-ism. For Christians, our need to contribute, our need to self-justify, and our need to be active overrides the logic of accepting what appears to be the best option: A free gift for which we much do nothing and which requires no response.

In As Good As It Gets, Jack Nicholson give Helen Hunt medical care she can't afford for her son. When he tells her that no thanks are required, that it's a free gift and he doesn't want to read her thank-you letter, she becomes angry. People want to contribute. People need to self-justify. People desire to be active. So when we've got Good News (no contribution necessary...justification already accomplished...no activity required...) no one wants to hear it.
Posted by Nick Lannon at 1:21 PM