A Dishonest Manager, A Redeeming God 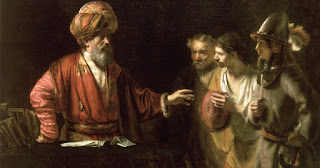 Jesus’ parable of the dishonest manager (Luke 16) is widely considered one of his most difficult. There’s a lot going on, and this post isn’t meant to address all of it. But there is Good News to be found here, if we know where to look. Underneath the story of a dishonest worldly manager—just where you’d never expect to find it—is a Gospel story about how the law-giving God is also the saving God, the willing redeemer of sinners like you and me.

A manager, Jesus says, is accused by the boss of being dishonest with the accounts, and so he’s getting fired. Worried that he’ll have to find real work, and not having the skill or strength, and being too ashamed to beg, the manager goes out to the people who owe the boss, and he reduces their debts. And the man is commended, not only by his master, but by Jesus, too! What’s going on here?

To see, I want to point to a biblical construction that you might be familiar with, even if you’ve never given it much thought. It’s called an “argument from lesser to greater,” and it goes like this: if this one thing is true, how much more this other thing must be true as it relates to God. A classic example comes from a parable Jesus tells in Matthew 7 when he says, “If you then, who are evil, know how to give good gifts to your children, how much more will your Father who is in heaven give good things to those who ask him!” This lesser-to-greater construction appears twice—by inference—in this parable of the dishonest manager:

1) if this dishonest manager finds himself in a bind with his earthly master, how much more will sinners like you and me find ourselves in a bind with our holy God?

2) if this master commends this dishonest manager for his shrewdness, how much more will our God commend us when we accept that the only way to redemption is to throw ourselves on his mercy?

Here’s how it works: this manager finds himself at a crisis point. He’s been caught out, and his future is at stake. He’s too weak to do manual labor, he’s too proud to beg. How is he going to ensure that he’s taken care of? What can he do? And here’s the point: you are just like him. Your future is similarly at stake. You’ve been caught out, too. You’ve done the things you ought not to have done, and you haven’t done the things you ought to have done. You have not loved God with your whole heart, soul, mind, and strength, and you have not loved your neighbor as yourself. Your eternal future is at stake, and you’re too weak to justify yourself. How are you going to ensure that you’re taken care of? What are you going to do?

Here is Jesus’ teaching: take your cue from this dishonest manager…and throw yourself on the mercy of your master. And the result? The very person against whom you have sinned will take care of you.

Now, this is hard to see in this parable; it’s not mentioned explicitly in the story. In fact, it seems more like the manager was ripping the master off at the beginning of the story, and ripping him off more at the end. The manager was doing something dishonest—something that got him fired—and now he’s reducing the amount of money that his master is going to get back from these loans. The master might be furious! And, of course, the master is still the master…if he had wanted to, he could have come in, seen what the dishonest manager had done, told everyone that, “no, actually, that guy had already been fired,” re-instituted the full debts and thrown this former manager in prison!

But there’s something else going on here. The dishonest manager has made a gamble. He’s taking an obvious risk, continuing to mess with the master’s books. He’s already been fired; now he’s risking an even worst punishment. But the gamble works: when the master sees what the manager has done, he commends him for it. And here’s why: because the dishonest manager, by his slashing of the debts, has made the master look generous.

Think about how this actually would have played out: the manager’s been fired, but when he walks out of the master’s office—still in possession of the books—no one else knows it yet! The master’s debtors still think this manager is working on behalf of the master. And he cuts down all their debts! These people—the ones who have taken out the loans—would all have thought the same thing: what a generous master this is, to reduce these debts like this! After all, it’s the master’s money! And so now we see the nature of the manager’s gamble: he’s betting that the master actually is generous, actually is merciful, and will appreciate being shown in this light. And, of course, it works. The master is indeed merciful, does appreciate being shown in this generous light, and shows mercy to the manager. And here’s that second argument from lesser to greater: if this master is like that, and commends this dishonest manager for his shrewdness, how much more will our God commend us when we throw ourselves on his mercy?

When we get caught out, we want desperately to figure out a solution on our own. We like to hide our shame in that way. It’s a special torture, isn’t it, that the person usually best positioned to help you—your teacher, your boss—is the one you are most afraid of approaching. When the one you’ve wronged is the only one who can help. And so it is with God. But with our God there is Good News! You need not fear. Our God will indeed help. He will indeed redeem. He will indeed save.

The dishonest manager throws himself on the mercy of his master…and this, Jesus is teaching us, is the only thing for a sinner to do. You must confess, you must repent, you must come again to Almighty God, against whom you have sinned, and ask for mercy. And indeed, the Gospel of Jesus Christ proclaims that your master HAS indeed worked to redeem you. You were dead in trespasses and sins. You are—or maybe, now, for the first time, you can be—alive together with Christ. Jesus has come, and you are made new. He has lived, and you are saved. He has died, and you are resurrected. He has been raised again, and you are justified.

You have been a dishonest manager, but there is something you can do. Confess, and throw yourself on the mercy of the very one against whom you have sinned. Almighty God—your true and merciful master—will not throw you out of the kingdom. Far from it! You will be commended, not because of anything you have done but because of your reliance on what Christ has done for you.