Is the Law Legalistic? 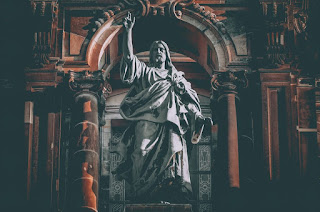 Christians are forever being called hypocrites online. Back when there were sports, a prime example was people who were made uncomfortable by the Super Bowl halftime show, which was, basically, a striptease, except the performers were already wearing so little that there was no reason to take anything off. Anyone who expressed any discomfort, especially for moral or religious reasons, was immediately labeled a hypocrite.

Christians who claim to be “biblically orthodox” are, for many people in the world, simply hypocrites by definition, right? You’ve heard it: “You claim to espouse the love and grace of Jesus Christ, but then you want to impose all of these moral rules on people, claiming that they’re God’s rules. Why shouldn’t a nearly-naked Jennifer Lopez gyrate her you-know-what during a sporting event that my six-year-old is watching? What about the love and grace?”  And I suppose there’s a kind of tension there. In fact, love, grace, and rules have always lived in a kind of tension…but it’s one that is understandable in Christ.

After college, I was tangentially involved in a ministry called The Silver Ring Thing, in which teens would wear silver rings proclaiming their intention to save themselves sexually for marriage. This was my first experience with what all these years later has come to be known as “purity culture.” It wasn’t anything more, though, than an effort to help young people be obedient to God’s clear command in scripture that sex is to be reserved for marriage.

Of course, problems cropped up quickly. First, the culture at large began to think this was ridiculous. “Sex is a natural part of life! It’s unhealthy to suppress these evolutionarily important urges!” And even, “How can you possibly know if you should marry someone if you don’t know if you’re sexually compatible? You’re doing yourself a disservice if you don’t have sex before marriage!” And second, the church (even the “good” parts) often began to struggle with this idea, too.

People who were trying to understand the profound nature of the Gospel—the Good News that sinners are saved by grace alone through faith alone, outside anything they had ever done, were doing, or would ever do—would, on occasion, and I count myself among them, get confused about the law. About morality. About good works.

Listen to Ephesians 2:8-9: “For by grace you have been saved through faith. And this is not your own doing; it is the gift of God, not a result of works, so that no one may boast.” This is the Good News. Therefore, the erroneous thinking went, anyone who tells someone what to do, or how to be obedient to the law, is undermining salvation by grace through faith and working against the Gospel. In this way of thinking, the people behind The Silver Ring Thing were recast as legalists. And so “purity culture”—and just look this up if you don’t believe me—became a negative descriptor of the allegedly legalistic ways that law-loving holier-than-thou Christians were making people who sinned sexually feel badly about themselves.

The problem with this thinking is that it’s not just some “purity culture” that gets a bad rap. It’s the desire for purity itself! All of a sudden, talking about God’s plan for sex—as laid out in the Bible—and striving to uphold it, was bad. If you claimed to believe in the Gospel, telling someone about God’s good design for sexual intimacy was somehow off limits! You weren’t allowed to do it! It was “legalism.”

In this context, Jesus’ words at the beginning of the Sermon on the Mount in Matthew 5 are thrown into sharp relief: “You are the salt of the earth…Let your light shine before others, so that they may see your good works and give glory to your Father in heaven…Whoever breaks one of the least of these commandments, and teaches others to do the same, will be called least in the kingdom of heaven; but whoever does them and teaches them will be called great in the kingdom of heaven.”

This is the same Jesus. He upholds the law, and he saves us by grace.

The truth is that Jesus is the gift of God by which we are saved and that he calls us to lead lives of radical obedience and holiness. After Paul tells us that we are saved through faith, as a gift from God, he tells us something else: “For we are his workmanship, created in Christ Jesus for good works, which God prepared beforehand, that we should walk in them” (Eph 2:10).

Understood in that order, a Jesus who calls us to good works can start to make sense. This is how we can understand the relationship of the law—be salt, be a light to the world, obey the commandments and teach others to do the same—to the Gospel. This is how we can talk endlessly about the boundless love of Jesus and at the same time support, for instance, a biblically orthodox design for sexual purity. This is how we can relentlessly preach the finished work of Christ for sinners and at the same time desire to be faithful to the order for life that God has set out in Scripture. This is how we can say that God saves you completely outside of what you do and that what you do totally matters. We can say all of that because, as Ephesians proclaims, God has prepared good works for us. We are not on our own! We are not saved, turned loose, and commanded to do better. And we certainly are not saved on the condition of our obedience. No: in the package of your free salvation is a relationship with God, the gift of the Holy Spirit, and a set of good works that God has created just for you.

You are, according to God’s own promise, a new creation in Christ. The law has done its killing work, and Jesus has done his resurrecting work. This new creation—you—will be the salt of the earth. You will be a light to the world. You will obey the commandments and call out in repentance when you fall short. As a community of the faithful, we will teach each other, by the guidance of the Holy Spirit, how to do these things. How to be salt. How to be light. How to be obedient, always remembering that this obedience is itself a gift from God, our loving a result of having first been loved, in our sin, by him.
Posted by Nick Lannon at 11:06 AM