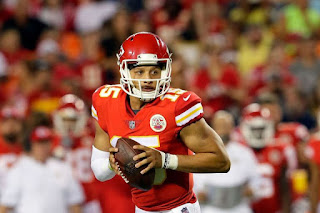 Patrick Mahomes is the second-year (but first year as the starter) quarterback for the Kansas City Chiefs. He is lighting the NFL on fire. I know, I know…that metaphor isn’t quite right. He’s blowing the NFL up like a nuclear warhead. Mahomes had more touchdown passes through the first three weeks of the season than…anyone ever. He’s got an incredibly strong arm, agility to beat the band, and the smarts to make the right reads and find the right receivers.

And then he played on Monday Night Football for the first time.

At the beginning, he wasn’t his normal (well, normal for four total NFL starts) stellar self, and I thought I was going to write a post about how we’re all human, even Patrick Mahomes. He was bouncing balls at his receiver’s feet and the Chiefs were losing to the Denver Broncos. But then, Mahomes (and, to be fair, the rest of his team) recovered from a ten-point fourth-quarter deficit to score the game-winning touchdown with under two minutes left. Mahomes-mania has reached an ever-higher fever pitch this week.

One play in particular during that fourth quarter, Mahomes was flushed out of the pocket (oh yes, on Monday night, he had more passing yards from outside the pocket than…anyone ever) to his left and scrambled toward the sideline. All-pro Von Miller dogged him, not giving him any space to pull his arm back to throw. What did Mahomes do? He calmly transferred the ball into his left hand and shot-putted it forward to his receiver. Miller looked as incredulous as the announcers sounded.

Jesus, save Patrick Mahomes. Do it today, even though today is the today on which it appears he needs saving least.

This is a prayer that we all might pray for ourselves: that when things are going well we remember from whence our saving comes. God, prevent us from being like the rich young ruler, who couldn’t see past his riches to Christ’s saving grace and went away sad (Mark 10, Matthew 19). Don’t let us allow our successes, our triumphs, our strengths, or our victories blind us to our need for you.

May God help us to remember the truth: that on our best days, he had to die for us. And when we forget, and think we’re doing well—when we think we’re Patrick Mahomes—and then start to think that our forgetfulness makes us the worst…may he remind of this other truth: that on our worst days, he did die for us. Amen.
Posted by Nick Lannon at 11:01 PM