Ashley Horner is More Impressive than You 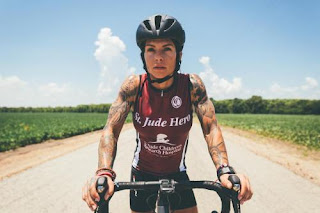 Excuse me? Ma’am? Just who is it that you’re trying to impress?

Now, Horner would probably say that she’s not trying to impress anyone. What she has said is that she’s doing it to empower women, and she’s also doing it to raise awareness of and money for an orphanage in Haiti. But her claims that she’s not trying to impress anyone fall on deaf ears. Those words ring with the same tune that plays when people say things like, “I have no regrets,” or “I don’t care what anyone thinks of me.” These are things that people say—and things that people mean—but that aren’t actually true. Everyone has regrets. Everyone cares what other people think of them. And no one runs 50 Ironmans (Ironmen?) in 50 days without trying to impress someone.

See, we’re all trying to impress someone. Even if that someone is ourselves, or our projections of our dead fathers, or God, or the nameless void that is “the universe.” We are all engaged in this effort to impress, to self-justify.

This will sound silly—though, in the face of what Ashley Horner is primed to attempt, most things will—but I remember thinking, when my wife and I were almost settled into our first home together, that if we just found the right couch to go on a certain wall in the living room, everything would be all right. Ridiculous, right? But take a second. Reflect on your own life. What silly things have you found yourself thinking about where, if they just worked out in the right way, then everything would be all right. If you just got into that school. Or got that promotion. Or got that girl to say yes. Or got that guy to like that particular Instagram post. We are all constantly engaged in this effort to self-justify. We are on a quest: for the right couch, the right school, the right job, the right guy. The problem is that the quest is never-ending.

When we brought home the couch that was going to make everything all right, it was raining. We were careful, and we got the couch into the house and in place without ruining it. But later that day, we went outside and discovered that the trunk of our car had a leak in it and was completely full of water. Nothing was all right once again.

This is the problem that Ashley Horner, as a member of the human race, will run into. She may well, of course, run into it before her Ironman quest is even over. Most experts don’t think that her body will be able to do what she’s planning to ask of it. It will shut down at some point, refusing to let her go on. But even if she finishes her 50 triathlons, what will happen on the morning of the fifty-first day?

She’ll wake up, and everything won’t be all right.

The orphanage in Haiti will eventually use up the money she raises. Children will still be without parents. There will still be women who don’t believe that they can do anything they set their minds to. What will Ashley Horner do then? Will she do 51 triathlons in 51 days? One hundred triathlons in one hundred days? Where does it end?


“Billy Edwards, coach of the Naval Academy’s three-time national championship triathlon team and a 19-time Ironman finisher, has his doubts: ‘In my opinion, she’s probably going to fail. Over the course of 50 days, there’s going to be a point where she encounters the limits of her physical ability.’” This will be the key moment for Horner, as it is for all of us. Edwards wonders where Horner will compromise. Maybe extend the time frame, or go to regular triathlons instead of Ironman-length. But for true efforts at self-justification, compromise is the same as failure. Ashley Horner says as much: “Bottom line, I’m going to do whatever it takes to get it done.”

But it’s when we “reach the limits of [our] ability” that we can go a different way than throwing ourselves blindly against the brick wall of “do whatever it takes.” After all, some things can’t be done. Jesus Christ offers another way.

It would be tempting, at this point, to say something like, “When you come to the end of yourself, Jesus Christ takes over.” And while that’s pretty good news, it’s not the Good News—the Gospel that the disciples, Paul, and the Church have been proclaiming since that Sunday morning so long ago. Indeed, it’s the fact of that Sunday morning—that where there was once a body there is now an empty tomb—that makes the Good News better than “Jesus takes over where you leave off.”

In Christ, however, we are alive. Bottom line, he already did whatever it took to get it done. The sins of the world, borne on his shoulders. His divine righteousness, given to us. 50 triathlons in 50 days or a pulled muscle getting out of bed. It is finished.
Posted by Nick Lannon at 2:51 PM