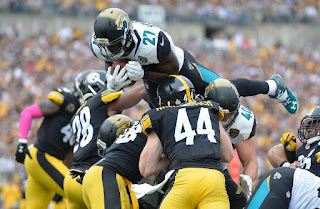 I’m a Pittsburgh Steelers fan. In the main, the Steelers are a pretty great team for whom to root. They’re almost always pretty good, and win their division most years. Their ownership is stable, evidenced by the fact that they’ve had three coaches since 1969. For comparison’s sake, the Cleveland Browns—a nominal rival of the Steelers—have had eighteen coaches in that same period. The Browns are terrible. One of my favorite statistics is that, since he entered the league, Ben Roethlisberger, the Steelers’ veteran quarterback, is the winningest quarterback at the Browns’ stadium…and he plays there once per season. The Steelers have won six Super Bowls, more than any other franchise.

Yes, being a Steelers fan is a pretty good life. Except for the New England Patriots. There’s a simple truth here: the Patriots are better than the Steelers in just about every way. Their quarterback (Tom Brady) is better than ours. Their coach (Bill Belichick) is better than ours. They’ve been to seven consecutive AFC Championship games. Neither of the two Super Bowls the Steelers have won in the Brady era have featured victories against the Patriots. Brady is 7-2 all-time against Roethlisberger. I could say that our uniforms are better than theirs—this is inarguably true—but when you start getting down to hosiery, you know you’re scraping the bottom of the barrel.

This past weekend, the Steelers and the Patriots both played football games in which they were heavily favored for the right to meet each other in the AFC Championship game. The Patriots played (and soundly defeated) the Tennessee Titans, because of course they did. The Steelers played (and lost to) the Jacksonville Jaguars.

This recent loss to Jacksonville is, by any measure, a complete embarrassment. ESPN personality Michael Wilbon called the Steelers (seven point favorites pre-game) “dogs.” There’s at least some honor is losing to Brady. But the Jaguars’ quarterback, Blake Bortles, is the anti-Tom Brady. While Brady is almost universally regarded as the greatest of all time, Bortles has spent his short NFL career becoming a walking punchline. In August, when asked about how practicing against Drew Brees helped his defense, Saints defensive end Cameron Jordan said, “It helps the defense. It’s not like we're going against Blake Bortles.” In September, Ted Cruz—yes, that one—tweeted that “losing to Blake Bortles twice in one week would just be cruel.” Blake Bortles, and the rest of the Jaguars, put 45 points on the Steelers on Sunday afternoon.

So why am I not rending my garments? Why am I not gnashing my teeth? Because the Steelers were going to lose to the Patriots this upcoming week anyway.

In 2 Corinthians 3, Paul writes about two "ministries." Here’s what he says:

The New England Patriots are a ministry of death. Their greatness is carved in letters on stone. They are so glorious that mere mortals cannot look them full in the face. Tom Brady wears Ugg boots in public and barely takes any heat for it. The Patriots are unassailable. I do not rend my garments and I do not gnash my teeth for a simple reason: I am already dead.

The glory of the Patriots has destroyed the ability of a loss to the Jaguars to affect me. I’m dead already. This is how, if you’ll pardon the admittedly superficial example, the ministry “carved in letters on stone” works. God’s law—holy and righteous as it is—destroys any chance for victory. The bare existence of the Patriots terminates any hope I might have for Steelers glory. There’s no use, for instance, in saying “Wait until next year.” The Patriots will be there. They are eternal. They are carved in letters on stone. As Martin Luther so eloquently put it, “The quest for glory can never be satisfied. It must be extinguished.” Notice the source of the action here: the quest must be extinguished by some outside force. No one willingly puts away their quest for glory. It must be ripped from their cold, dead hands. This is a Patriots specialty. The law is glorious, so glorious that it hurts the eyes…but it will crush you. Just ask the Tennessee Titans.

But there is a more glorious glory.

The law of sin and death, carved in letters on stone, is defeated forever. Unlike the Patriots. I doubt they’ll ever lose again.
Posted by Nick Lannon at 3:11 PM