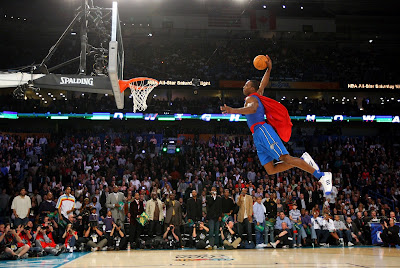 Perhaps you think that the NBA season ends when…well, when the NBA season ends. You couldn’t be more wrong. Beginning on July 1, free agents (that is, players whose contracts have expired) can sign contracts with new teams. Every year, there are big-name free agents being courted by multiple teams, each of which might use multiple lures (market size, endorsement opportunities, weather, state income tax, etc) to try to convince the player to sign with their team.

This year, the biggest free agent on the market was Dwight Howard. Howard’s free agency was perhaps more notorious than usual due to his well-known (and long-standing) indecisiveness, and to the fact that he was considering leaving the Los Angeles Lakers, normally a destination team (that is, an annual attractor of free agents rather than a team that is left by them).

A little more background might help: The Lakers’ star player is Kobe Byrant, a consensus top-10 player of all time, a legendary competitor, and a hater of Dwight Howard. Howard is known as a happy-go-lucky-guy, perhaps more interested in having fun and participating in dunk contests than in winning championships. This grates on Byrant. To the sports world, otherworldly competitiveness is a more righteous characteristic (because you can generate it in yourself) than otherworldly talent (because it comes as a gift from the gods of DNA).

As part of the Lakers’ pitch to Howard, hoping that he would resign with them (and believe me, they were hoping that we would; he is a transcendently talented player), Bryant, future Hall-of-Fame point guard Steve Nash, head coach Mike D’Antoni and general manager Mitch Kupchak met with Howard personally.  Here is a tweet from ESPN NBA writer Chris Broussard following that meeting (note: D12 is Dwight Howard; 12 is his jersey number):

@Chris_Broussard: Sources close to Howard tell me Kobe’s reported pitch in Tuesday’s meeting about teaching D12 how to win will be a “complete turnoff” to D12

Bryant pledged to teach Howard how to win on July 2. On July 5, Howard announced that he would sign a contract with the Houston Rockets. This is hilarious: Kobe Bryant actually thought that telling Dwight Howard that he would “teach him how to win” would make him want to stay!

Who among us likes to be offered a lesson that we don’t think we need? Or even offered a lesson we know we need? What if someone were to come up to you and tell you that they’d be happy to teach you how to be a good mother? You’d feel like I would if someone told me that they would be willing to teach me how to be a good preacher. It wouldn’t matter a whit if they could, or even if we truly needed to learn. We would be wounded, and we’d run the other way.

We Christians must be less self-actualized than Dwight Howard, because we’ll sit there and take it in the teeth for years before we’ll look to escape. Bryant said, “You don’t know how to win,” and Howard bolted for the door. The Law says, “You’re not a good Christian” and we just try to do better. We scrape together more for the offering plate, we volunteer more hours at the food pantry, and we give more effort to our daily walk with God. Howard knew to get out while the getting was good. Often, Christians don’t.

For Kobe, that’s the end of the story. He’ll teach, but it’s up to you to implement the lesson. In Christianity, it’s only the beginning of the story, intended to show you how far from a winner you are. It’s the first word, but not the final one. Kobe Bryant’s sermon has a beginning, but not an end! God’s final word is this: “If anybody does sin, we have an advocate with the Father—Jesus Christ, the Righteous One. He is the atoning sacrifice for our sins, and not only for ours but also for the sins of the whole world” (1 John 1:1-2).