Can Jason Collins Be A Christian? 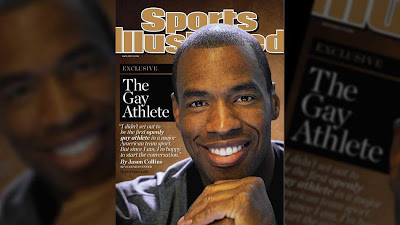 The big news in the sports world this week is that Jason Collins (a 34-year-old free agent center most recently of the Washington Wizards) has announced that he's gay. This makes him the first active (as long as he's signed by an NBA franchise for next season) openly homosexual male athlete in one of America's "Big Four" professional sports leagues (NBA, NFL, MLB, and NHL). The sports talk-o-sphere has been falling all over itself for the last 48 hours to make sure that no corner of this story goes un-peeked-under.

On Monday, writers Chris Broussard (an ESPN.com NBA "Insider") and LZ Granderson (an openly gay sportswriter for ESPN the Magazine) appeared on the ESPN show "Outside the Lines" to discuss the Collins story and the potential ramifications across the league. They talked about whether or not Collins will sign with a team (a discussion complicated by the fact that Collins is, by any measure, on the downside of his career, and would likely be, at best, the 11th or 12th man on an NBA 12-man roster), how he will be received in locker rooms, and what his announcement could mean in terms of other players deciding to come out.  Then, at around the 7:30 mark, the discussion turns to Christianity.  Here's the  discussion, in full (fast-forward to 7:30 for the section pertinent to this post):

To his credit, Broussard doesn't set out to question Collins' Christianity. He doesn't even bring his own beliefs into the mix until Granderson mentions that they're on "opposite ends of the spectrum" of this debate. However, he can't be given a pass on what he eventually says, which is that Collins, because of his life of "open rebellion to God," can't be a Christian.  Broussard claims that, "If you're openly living in unrepentant sin, whatever it may be...I believe that's walking in open rebellion to God and to Jesus Christ, so I would not characterize that person as a Christian because I don't think the Bible would characterize them as a Christian."

Wherever you may fall on the Broussard-to-Granderson "spectrum" of this debate, one thing needs to be said, and said loudly: Christianity is for sinners. It is for the openly rebellious. Jesus casts himself in the role of physician, saying that the healthy have no need of him, and that he came for sinners (Mark 2:17). St. Paul says that it's not only the sick who are visited by the Healer but that it is people who are actively running away that are pursued by the Prince of Peace:

But God demonstrates his own love for us in this: While we were still sinners, Christ died for us. Since we have now been justified by his blood, how much more shall we be saved from God’s wrath through him! For if, while we were God’s enemies, we were reconciled to him through the death of his Son, how much more, having been reconciled, shall we be saved through his life! (Romans 5:8-10)

Christians are beset by the same malady that afflicts non-Christians: we are human. Paul dealt with a thorn in his flesh from which he begged to be freed (1 Corinthians 12:7). He recognizes the Corinthian Christians as "enriched," "not lacking in any spiritual gift," and "sanctified in Christ Jesus" (1 Corinthians 1:2-7) while at the same time describing their sins as "of a kind not even the pagans tolerate" (1 Corinthians 5:1). They're suing each other (6:1) and denying the resurrection of the dead (chapter 15), but Paul says with full confidence that they "will be blameless on the day of our Lord Jesus Christ" (1:8).

The message of the Bible is clear: we are all sheep who have wandered away (Luke 15:3-7).  Far from disqualifying us for Christianity, this sorry state puts Jesus' crosshairs directly on us! He searches diligently until he finds us, puts us on his shoulders, carries us home, and celebrates with us. But even this most peaceful of stories doesn't do the real story justice: God made Christ, who knew no sin, to be sin for us, so that we, the rebellious sinners, could become the righteousness of God (2 Corinthians 5:21).

I'm grateful that Jason Collins can be a Christian. It means that I can be one, too.
Posted by Nick Lannon at 9:30 AM