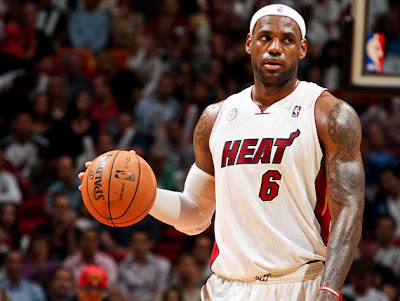 Barkley says, joining a growing throng, that the Heat are "too small" and "have got to make a move." This is, in the main, the same roster that, ahem, won the title last year. We'll see.

8:45 The Heat are 4-6 from the field with the four makes from a combined distance of zero inches.  Two huge dunks by LeBron, two medium dunks by Wade.  That was fast...and impressive.  Heat, 8-2.

6:27 Dwight Howard must be on the way back to health; he's un-guardable, and getting every rebound.  Heat, 8-6.

3:34 The Lakers are definitely better than they've been.  These two teams are going hard.  The Heat have to go hard to compete with size, and the Lakers definitely have size.  Heat, 16-14.

3:17  LeBron has the last 4 Heat points, destroying first Dwight Howard and then Pau Gasol off the dribble. Ridiculous for either guy to be guarding LeBron.

1:02 Steve Kerr's analysis is making Reggie Miller seem like a mouth-breathing troglodyte. They're just not at all in the same league. 22-22 tie.

:30 LeBron takes Earl Clark off the dribble for a dunk...Kobe (the help defender) didn't even try. Par for the course. 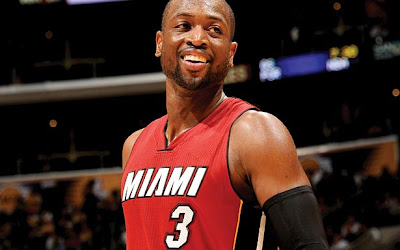 9:39 Howard and Gasol both on the floor, without Nash. It'll be interesting to see how their offense goes.  Um, Gasol for three?  So, not well.

8:10 When LeBron goes off the floor, the Heat just look lost. They run everything, literally, through him. He's the creator, facilitator, and finisher. I read someone once who said that even when LeBron spends a possession in the corner, the whole defense has to keep one eye on him, opening the floor for other action. When he's not there, the other team can relax and just play. Heat, 31-29.

6:55 Pau and Dwight are actually working pretty well together...but they can't finish at the rim. You've gotta expect that that'll change. Ah...here come LeBron, Nash, and Bryant. Kerr: "it feels like this game is out of hand; but it's right there." Heat 33-29.

4:23 Kerr makes a good point. The Lakers are able to stay close because the Heat have had to play Joel Anthony a bunch of minutes to combat the Lakers' size. He's a non-entity on offense and also takes a floor spot away from a shooter. 35-35 tie.

3:16 Mark Wahlberg is sitting RIGHT next to the Lakers bench. I mean, there's no room between his seat and the last bench seat. Kobe came off the court just now and sat next to Marky Mark. D'Antoni might accidentally put him in the game. Heat 39-35.

1:03 Dwight Howard is a brutal match-up for the Heat. He's getting every rebound in his sphere of influence, which is basically the whole lane. Lakers, 43-41.

:00 The half ends with each team running an iconic play. The Lakers run a terrifying Nash/Howard pick-and-roll, with Howard rolling down the middle of the lane for the easy lay-up. Every Western Conference playoff team just broke out into a cold sweat. The Heat came down, ran a pick-and-roll for Wade, who shed both defenders and drove the lane before dropping off for a huge LeBron dunk. A really well-played first half...this one's gonna be close. Lakers, 45-44. 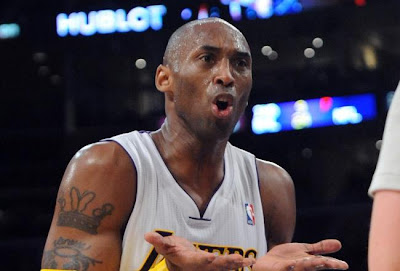 8:45 Wade and James have long-lob ESP. They find each other for half-court-or-longer alley-oops ridiculously often. Heat, 52-49.

6:18 Kobe has been almost a complete non-factor. He's 2-12 from the floor. It makes me think of something I read today, where J.A. Adande said that the reason that LeBron/Jordan comparisons were so premature is that LeBron has to at least equal Jordan's "ring count" before that conversation can even happen. I don't understand this thesis. Robert Horry isn't a better player than Jordan, even though he's got more rings. "Oh," you might say, "Horry was never the key player on any of those championship teams." Okay, well, Bill Russell isn't thought of as greater than Michael Jordan, and he has far more championships. Kobe's been around longer than LeBron, and will likely finish with more rings, but LeBron's better, both now and in sum. I don't know what "greatness" means...I guess you can define that however you want.  I know what "better" means, and LeBron is a better basketball player now than Kobe has ever been. Heat, 62-55.

:36.4 Championship defense by the Heat, bewilderment by the Lakers, brilliance by LeBron, "Are you kidding me?" by Reggie Miller. Heat, 73-65. 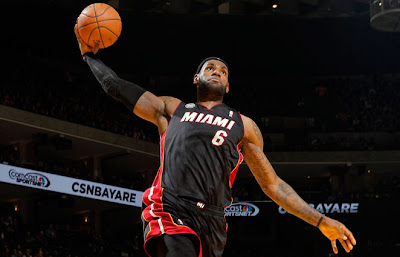 8:43 Kobe just can't stop shooting. He did make an entry pass in to Howard, but he used his telekinetic powers to make Howard miss and have the rebound tapped out to him. He's made the last two, though, so may be getting hot. Heat, 78-74.

8:17 Huge lineup for Lakers (Gasol and Howard), tiny lineup for the Heat (LeBron, Bosh). Can the Lakers take advantage? Or will the Heat's speed be the tipping point? 78-78 tie.

Taken 2 is really the Blu-Ray I've got to see to believe? Really? What will I believe once I see it?

1:51 LeBron went to guard Kobe after Kobe hit a big three to tie the game. Forced him to pass, then found Wade for an easy two. Sequence ends with another episode of Hack-a-Dwight. Heat, 92-90.

:49 LeBron with two assists and a bucket to give the Heat a tiny bit of room to breathe. He'd better be on Kobe when this time-out is over. Heat, 96-90.