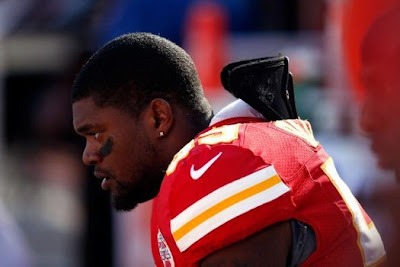 Early on Saturday morning, Chiefs linebacker Jovan Belcher shot and killed his girlfriend, Kasandra Perkins, then drove to the Chiefs facility, thanked his coach, Romeo Crennel, and general manager, Scott Pioli, before shooting himself. Belcher and Perkins leave behind an infant girl.

As many have said more eloquently than I ever could, this is an unspeakable tragedy. Belcher's teammates have spent the weekend with microphones in their faces, trying to come up with something to say about a teammate that they, all of a sudden, fear they never knew.

There is no easy transition from the facts of the story to a discussion of anything else, which is why Bob Costas' attempt to do so on Sunday night has made some people angry. At halftime of the Sunday Night Football game, Costas made the following comments about what he heard people saying in the wake of the tragedy:


For our purposes, the gun control issue will be set aside. However you feel about the issue of the availability of guns in our nation, it is Costas' opening comments that seem to cut deepest. "That sort of perspective has a very short shelf life, because we will inevitably hear about the perspective we have supposedly again regained the next time ugly reality intrudes upon our games. Please. Those who need tragedies to continually recalibrate their sense of proportion about sports would seem to have little hope of ever truly achieving perspective."

Like so many thoughtful people, Costas' diagnosis is as on-target as his prescription is impotent. In fact, one might well argue that Costas isn't even offering a prescription at all, simply relegating those without perspective to the trash-heap of lost causes. He is precisely correct that everyone will be saying the same thing after the next tragedy. I'm reminded of the Onion article "Nation Somehow Shocked by Human Nature Again." There are, however, two truths that he's missing.

First, no one has any perspective. We are all absolutely convinced that we are the center of the universe, that we are in control of our lives and and at least somewhat in control of the lives that come into our orbits, that good deeds reap good rewards, and that a host of other "truths" define our lives when they do not. Even in the most basic sense, sports fans tend to have no perspective. My attitude rises and falls with the performance of my teams, despite the fact that they play children's games that needn't affect my life in the slightest. One might wager on the fact that Costas himself has lost perspective a time or two, feeling that a sporting event meant something far more than one team ending the evening with more points, goals, or runs than the other.

Second, everyone needs profound events for recalibration. This is the genius of the church. Each week, we must be brought, again, into contact with a truth that we forget, week by week: Our righteousness is secured by the perfection of another, and this righteousness has been gifted to us with no expectation of recompense. The way in which we commonly view the world (that we are the center of things, and in control, and will get what we deserve) is so profoundly backward that it takes a profound event (a humbled diety, dying a criminal's death) to recalibrate us.

As the days pass, and we forget, as we inevitably will, the ugly truth about the world and about ourselves, let us rest on the truth that profound events have happened (especially at Christmas, Good Friday, and Easter) that can recalibrate us, give us hope, and offer true perspective.
Posted by Nick Lannon at 8:30 AM