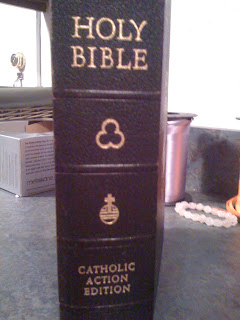 A while ago, I found this Bible in the sacristy of my church. I thought it was hilariously subtitled, "Catholic Action Edition."  I posted about possible exercises that might be included, things like, "What penance would John Maclane have to perform after the Nakatomi Plaza affair?"

Then, this week, I was rooting around the office of my new parish, and I came across the Bible below. I couldn't believe it. Not only was there a "Catholic Action Edition," there was a "Protestant Peace of Mind" edition. Without putting too fine a point on it, these two editions of the Bible highlight what has been a historical difference between the Catholic Church and Protestant Churches. 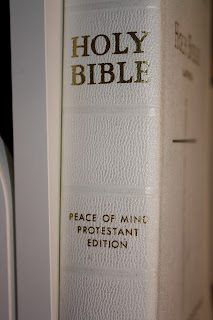 Traditionally, the Catholic Church has taught that humans must participate (at least to some degree) in our justification. In other words, God comes into our lives and gives us the assistance we need in order to move ourselves to the point at which we're worthy of an eternal life with him. Catholic Action.

Protestants protested (ha!) that this basically made God impotent. If he couldn't save a sinner (i.e. someone that wasn't going to be able to make the good choices required to participate in his or her own justification) then what kind of all-powerful God was he anyway.  And what kind of "good news" is it? Therefore, Protestants have traditionally taught that God saves the sinner despite their lack of participation. For instance, John Calvin talked about "irresistible grace" as one of his five main theological points. No action required. Protestant Peace of Mind.

These two editions of the Bible illustrate why I'm a Protestant. Peace of mind is so much more attractive than action required. The Gospel itself (the "Good News") is named after something that offers peace of mind, rather than requiring action.
Posted by Nick Lannon at 8:07 AM