Community and the Law of Letter Jackets 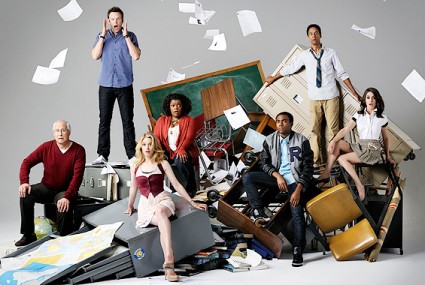 Anyone who played sports in high school knows about letter jackets.  It was the thing you always wanted to get, and the thing you wore at every opportunity.  My own relationship with my letter jacket was a complicated one: I was awarded a letter during my sophomore year...for marching band.  As if that wasn't indignity enough, the marching band letter was a totally different style than the sports letters, making it impossible for me to pretend that I was a "real" letterman.  Eventually, though, I was awarded several athletic letters and could wear my letter jacket proudly.  I never got to let a girl wear it, but you can't have everything.

The most interesting thing about letter jackets is what happens to them after graduation.  In other words, where do letter jackets go to die?  If there's one ironclad rule about letter jackets, it's that you can't wear them after you're out of high school.  There's nothing lamer than holding on to past coolness.  Check out the below clip from the show Community, wherein Troy (Donald Glover) tries to make a decision about his letter jacket, because people at the community college that he now attends have been making fun of him for wearing it:


Now, it may be obvious to all of us that Troy's mistake was wearing his letter jacket to college in the first place.  That's not what I'm interested in.  What interests me is the theological insight of his new friend Jeff Winger (Joel McHale):  Whether he takes the jacket off or keeps it on, he's doing it for "them."  That's what's weak.

This is a gorgeous (and when you add Donald Glover's bulging eyeballs, hilarious) illustration of the inescapability of the Law.  Whether we struggle to obey the law or we reject it, we are under its power.  Think of your parents: whether you are just like them or are committed to being nothing like them, they are still the ones influencing you.  If we strive to mold ourselves into today's Barbie-doll aesthetic or go the other way into shabby-chic, Barbie is still directing our decisions.  "Do not be fooled," St. Paul writes to the Galatians, "God will not be mocked" (6:7).  In other words, don't think that you can avoid the reach of the Law.  You can run toward it or away from it...but it still controls you.  There is no escape.

Well, except for THIS.
Posted by Nick Lannon at 8:00 AM