Can A Gorgeous Olympian Find Love...Please?

Lolo Jones, owner of a beautiful face, sculpted physique, one of sports' coolest names and the American record in the 60 meter hurdles, can't find a boyfriend. Why? She won't sleep with any of her suitors. Male depravity has never been in more glaring display than when, as Jones reports, a man told her that having sex with him would "make her run faster."


Jones is perhaps the first person I've ever heard make this admission without talking about their Christian faith.  A saved celebrity virginity is almost always presented as a testament to the celebrity's faith in God, and their desire to please Him.  I should note at this point that I can't afford HBO and therefore haven't seen the whole interview...I'm reacting only to the clip above.

Jones doesn't seem to make any such claim.  She doesn't hold up her successful preservation of her chastity as evidence of her righteousness...she just says that it's a gift she wants to give her husband.  Of course, none of us (even those of us who successfully saved themselves for marriage...we'll be distributing a survey later...) can claim sexual righteousness in the eyes of God.  The Sermon on the Mount prevents that (Matthew 5:27-28).  It is heartening that Jones doesn't try to. 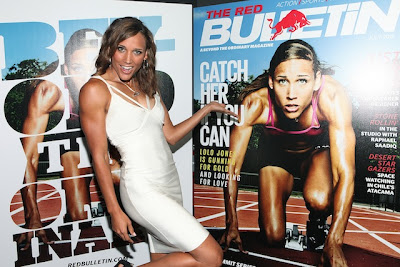 Sexual activity is often the banana peel on which public single Christians slip.  It made everyone question the legitimacy of Britney Spears' claims to be a Christian.  Christians want to (and do) have sex before marriage.  It doesn't mean they're not Christians.  It means they need Christ (which, as they say, we already knew...).  I'm glad that if Lolo Jones' willpower folds before her wedding night, she hasn't tied her relationship to God to some supposed righteousness that she's struggling to maintain.  And I hope she meets a nice guy soon.  Can we get Tim Tebow her number?  As Dan LeBatard said on his show yesterday, they would have "Olympic babies who will save this earth."  I could get behind that.