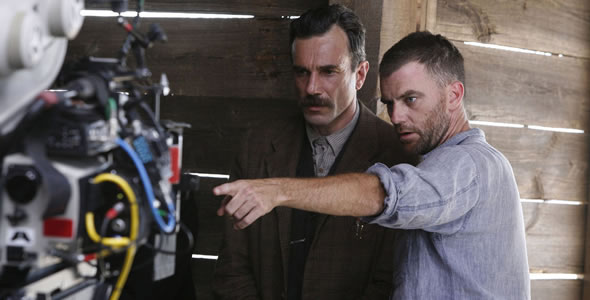 P.T. Anderson is (almost unarguably) one of the greatest American filmmakers currently working.  The five films he's directed (Hard Eight [originally titled Sydney], Boogie Nights, Magnolia, Punch-Drunk Love, and There Will Be Blood) have an obscene average Rotten Tomatoes score of 85.4% fresh.  A true visual artist, Anderson's films are often as much about enduring images as they are about affecting performances. His skill has left his many fans impatiently excited for the release of his next project, The Master, starring Philip Seymour Hoffman as the charismatic leader of a Mormon-like religion.

Hard Eight (1996)
The muse of P.T. Anderson's early career may well have been John C. Reilly.  Before Reilly took a sharp left turn into sophomoric comedy (Talladega Nights, Walk Hard, Step Brothers), he was a series (and very talented) dramatic actor.  In Hard Eight, he plays a down-on-his luck gambler who falls in with father-figure Sydney (Philip Baker Hall, another Anderson staple).  The film is a little raw for an Anderson picture, but for a debut feature, it's pretty stunning.  Boasting a cast featuring Reilly, Hall, Gwenyth Paltrow, and Samuel L. Jackson, Hard Eight is an assured film by a novice writer/director.  As tight and well-done as Hard Eight is, Anderson would only get better.


Boogie Nights (1997)
Just a year after making his name with Hard Eight, Anderson brought the house down with Boogie Nights.  A gorgeous, captivating, and heart-wrenching film about the world of adult cinema in the 70s (when videotape was threatening the "high art" aspirations of adult "filmmakers), Boogie Nights features wonderful performances from Anderson regulars Reilly and Hall, who are joined by William H. Macy, Philip Seymour Hoffman, Don Cheadle, Heather Graham, Julianne Moore, Burt Reynolds, and Mark Wahlberg's...ahem...member.  Only the fifth film in which Wahlberg wasn't credited as "Marky Mark," Boogie Nights made him a star.  It is the story arcs, though, of Wahlberg, Macy, Hoffman, Cheadle, and Graham that are most affecting.  Brilliantly written and acted, Boogie Nights is not to be missed.


Magnolia (1999)
Also known as "the movie that proved Tom Cruise could act," Magnolia opened to hugely excited crowds...and sort of disappointed them.  Though for my money Anderson't best movie (and certainly featuring one of the greatest opening scenes/monologues in the history of film), Magnolia is not as accessible as Boogie Nights (or even Hard Eight).  Whereas those films have a single story-line followed from beginning to end, Magnolia is the ultimate these-people-are-all-interconnected movie.  It's not derivative, though; it's brilliant, innovative, heart-breaking, full of wisdom, and ultimately religiously hopeful.  The wonderful actors giving wonderful performances are too many to list.  See this movie, and, if you can, consider the ending without dismissing it.


Punch-Drunk Love (2002)
Also known as "the movie that proved Adam Sandler could act," Punch-Drunk Love wasn't seen by much of anyone.  A love story between a normal woman (Emily Watson) and an intensely socially awkward man (Sandler), Punch-Drunk Love is just one more entry in the "P.T. Anderson knows how to pull the human heartstrings without being cheesy" canon.  My only criticism of this movie is that it's too short: at a brisk 95 minutes, I would love to engage with these characters for much longer.  I could absolutely stand for Love to clock in at Magnolia length (a daunting-but-doable 188 minutes).  Bearing special mention here is the Jon Brion score, especially in the scene during which Sandler interacts with one of his many sisters in his "office" about whether or not he's coming over for dinner.  A movie that didn't make back its budget, Punch-Drunk Love deserves a wider viewership than it got.


There Will Be Blood (2007)
There Will Be Blood could have been conceived as a vanity project for star Daniel Day-Lewis.  He is so good in the role of oilman Daniel Plainview that it led to the most anti-climactic Academy Awards ceremony of all time.  Despite George Clooney, Johnny Depp, and Tommy Lee Jones also being up for the award, I can't imagine the vote being close in any way.  Audiences left theaters not remembering much about the film other than Day-Lewis' titanic performance (and perhaps the fact that he wanted to drink their milkshake).  Though his highest rated film to date, There Will Be Blood is notable for Day-Lewis to the exclusion of everything else.

Email ThisBlogThis!Share to TwitterShare to FacebookShare to Pinterest
Labels: movies, the rundown