Hit 'Em For Money, Hurt 'Em For A Little More 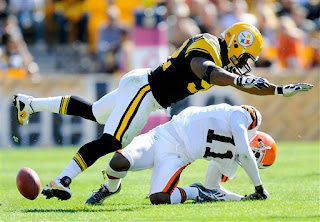 The recent revelations about the New Orleans Saints' "bounty" program have rocked the talking-head world at ESPN. The Saints, apparently,  had a program, administered by defensive coordinator Gregg Williams (who ran similar programs at previous teams), wherein players received cash bonuses for inflicting injuries on opposing players. For instance, knocking a quarterback out of the game might get you $10,000, and getting him carted off on a stretcher might earn you $20,000. No one seems to be particularly surprised that this kind of thing was going on; many have suggested that this occurs on every team, and that the Saints mistake was writing it all down and keeping track.
I don't want to get into the morality of paying players to intentionally injure other players, although I will say that it seems an awful lot like criminal activity (aggravated assault) to me. When Tonya Harding paid her boyfriend to take out Nancy Kerrigan, people went to prison. It has been notoriously difficult to prove "intent" on the athletic field, but with documented records of who got what for hurting whom, intent seems a bit easier to prove. Alternatively, I want to use these revelations (and especially the response of several former players) as an opportunity to talk about a theological idea: casuistry. 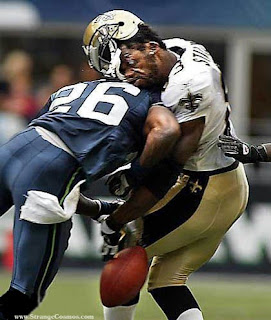 Over the last couple of days, I've heard both Mike Golic and Marcellus Wiley (former players) say that everyone is overreacting to this story. They say that they "went after the quarterback" as hard as they could on every play, and couldn't have done more if they'd been paid to. Their argument was, in effect, that the devastation of a hit would be the same, whatever the motivation of the player delivering it. Put another way, they said something like: "Football is a violent game, and people are going to get hurt playing it. We all know that going in. Paying people a little extra to put a little extra on some hits isn't going to change anything."
Casuistry might well be defined as "an attempt, via nit-picking, to appear to obey a rule whilst breaking it." It seems that it would be clear to the most uneducated observer that while a player might not be able to hit a quarterback harder  to earn their little bonus, they might well be able to hit them in the knee or in the head. And since when is "I play a game that is inherently violent" an acceptable excuse for attempting to injure another person? The best example of casuistry of all time is this 2005 story in The Telegraph, the first line of which is, "Machines will perform euthanasia on terminally ill patients in Israel under legislation devised not to offend Jewish law, which forbids people taking human life." Yowza.
As humans, we answer "thou shalt not kill" with "I'm not killing. This machine that I invented, put in place, and turned on is!" Apparently, as football players, we turn "don't intentionally injure another person" into "don't intentionally injure another person unless they signed up to play a game in which they might get injured anyway." Casuistry is the human occupation. It's what we must do when faced with a rule that we cannot follow. We mold the rule to fit our behavior, because we find that we cannot improve our behavior to match the requirement of the rule. When Jesus gives us the ultimate rule, that to be in a relationship with God, we must be as perfect as He is (Matthew 5:48), we turn to casuistry for an escape hatch. Usually, though, we're caught out, and look, like these former NFLers, pretty ridiculous.
Posted by Nick Lannon at 7:17 AM