With two weeks between the conference championship games and the Super Bowl (ostensibly to let injured players heal) the hype machine goes into overdrive before the big game.

• ESPN really has to scrape the bottom of the barrel to give some of its NFL analysts credibility. On their NBA studio show, to give a measure of perspective, Michael Wilbon introduces himself, and says that he’s joined by Jon Barry, “Hall-of-Famer Earvin ‘Magic’ Johnson”, and Chris Broussard. That seems appropriate. On the NFL set, though, everyone’s gotta have something. Stuart Scott actually mentioned that he’d played for one day in an NFL mini-camp before introducing Merril Hoge, “who once rushed for more than 100 yards in consecutive playoff games.” Really? In that case, Wilbon would like to introduce you to Jon Barry, who, um, played in the NBA for a time, and I’d like to introduce myself, who once ate nine ice cream sandwiches for breakfast. And yes, I’m prouder of that than Merril Hoge should be of his twin 100-yard performances.

• What’s with the “demo field?” Nothing is more awkward than three large men in Brooks Brothers pretending to block, pass, and tackle on a 30×60 piece of Astroturf in the parking lot of Lucas Oil Stadium. They bump each other’s lavaliere mics as they rub off one another, and take throwing the little six-inch out way too seriously. I’m looking at you, Trent Dilfer, with your exaggerated follow-through and your cuff links. 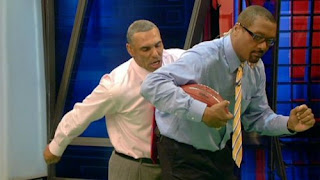 • I’m finished with the mind-numbing debate about “which quarterback I’d rather have” on Sunday, Tom Brady or Eli Manning. Every single time I hear the question discussed, it always comes down to the “analyst” actually wanting Eli’s receivers, or defense, or running game. If you’ve got Generic Team A and you’re playing Generic Team B and your life depends on the outcome? You’re taking Brady.

• Rob Gronkowski will play, but he’ll be pretty limited. There. Consider that story fully reported. No more speculation without information; it’s worse than taxation without representation. Bill Belichick is famous for monkeying with injury reports…he’s definitely not telling Chris Mortensen how Gronkowski’s really feeling.

• I listened to Peyton Manning’s interview with Trey Wingo (best name in sports journalism…or, ever) the other day, and was struck by his presence. He seems so much more a “man” than Eli does. Eli has definitely played his way into “pretty darn great quarterback” status this year, but he’ll never have the sheen of Brady (FIFTY touchdowns in one season! Three Super Bowls!) or the value of his brother. I don’t agree with NFL Magazine’s assertion that Peyton was this year’s NFL MVP due to the Colt’s winning a mere two games without him, but their performance does seem to suggest that he should have been NFL MVP every other season of his career.

• Chad Ochocinco is pretty funny. He told a group of reporters at media day (who apparently questioned his almost total lack of contribution to the Patriots offense this season) that he never said he was any good; it was something that the media put on him. This from the guy who donned a “Future Hall of Famer” jacket after a touchdown when he was in Cincinnati. All of his antics aside, I hope that Chad has a big game on Sunday, and that he’s humble about it. This season seems to have humbled him…I’m surprised he hasn’t gone back to Chad Johnson, who was one of the most feared receivers in the NFL. 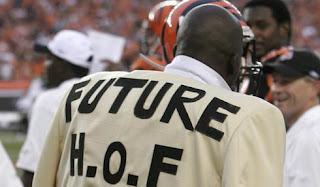 • What’s the deal with the Patriots trotting out the Verne Troyer All-Stars? Danny Woodhead is listed at 5’8″, Julian Edelman is listed at 5’10″, and Wes Welker is listed at 5’9″. These are all major contributors on a Super Bowl team! Edleman plays both ways! I think, on the road, that these three use Gronkowski’s game pants as a group sleeping bag. And yes, I felt like a treasure/rainbow joke was over the line.

• If the Patriots win this game, the rarified air that Brady breathes gets even more rarified. He joins Montana and Bradshaw as the only quarterbacks with 4 Super Bowl wins. And Brady will have done it without Rice, Taylor, Craig, and Lott and without Harris, Swann, and the Steel Curtain. He’ll have done it on, well…pure Bradyness.

• If the Giants win this game, Eli becomes a really nice guy and pretty darn great quarterback with two Super Bowl rings, and Peyton plays until he’s fifty, or as long as it takes to win another one.

• That “Ferris Bueller” Super Bowl ad with Matthew Broderick makes me sort of sad.
Posted by Nick Lannon at 3:17 PM