A special delivery for those of you who missed the first installment of our Summer Movie Series:  Drop Dead Gorgeous, and an opportunity for further discussion for those who did.  The film chronicles a beauty pageant in the tiny town of Mount Rose, Minnesota and the lengths to which contestants will go to win.

1)  A contestant's mother systematically murders her daughter's competition, only to find her own victorious daughter blown up in a parade swan explosion.  (Doesn't that, by the way, sound like a movie that you've GOT to see?)

2)  The pageant controls the lives of those who enter it, including the goth girls who reject it out of hand.

3)  The star of the film (played excellently by Kirsten Dunst) ends up making it all the way to nationals despite not officially "winning" any of the lower pageants.

The title of this post is a misnomer; there's not much Gospel in this movie.  It just worked really well as a play off the film's title; I couldn't resist.  Here's a recap, though, of some of the great discussion that was had last Sunday night, taking our gems as our template. 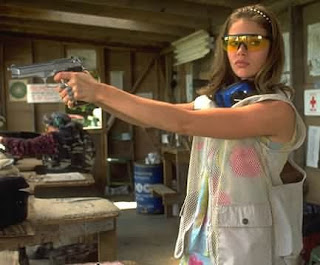 1/3)  We seem to be less in control of our lives than we think we are.  Doesn't it often seem like the harder we work to make something happen, that thing gets further and further away from us.  Perhaps, as theologians have argued for centuries, it is true that there is a sovereign God who is in charge of things.  As much as the Leeman family (in the film) tries to make sure that Becky wins the pageant (which she does), the victory is a pyrrhic one, last only for an evening before everything is taken from all of them.  Dunst, the runner-up who benefits from the swan explosion,  doesn't move on to the state or national pageants because of her talents, she moves on, as one might say, "by the grace of God."  At one point, when she bemoans the method by which she won the local pageant, her aunt says, "You're a good person, Amber.  Good things happen to good people."  This is what we all think, or at least wish was the case.  When Amber says, "Really?" the aunt cracks:  "No, that was total (expletive!), you're lucky as hell."  What one woman calls luck another might call divine intervention.

2)  There are a couple of characters in the film who spend all their time smoking in the girls' bathroom.  When asked if they're going to be in the pageant, they scoff.  But the interesting thing is that they are as defined by NOT being in the pageant as those who are in the pageant are defined by it.  Does that make sense?  Think of hippies and preppies (tip o' the hat to one of my teachers, Paul Zahl).  Hippies think that they are undefined free agents, able to what they want when they want to do it.  However, isn't there as defined a "hippie code" as there is a preppy one?  They both have accepted standards of dress, employment (or lack thereof), drug of choice (marijuana on the one hand, money and status on the other), and the list goes on.  We are all beholden to something, whether we are trying desperately to be "in" or trying desperately to show people that we don't care about being "in."

Our next showing will be of Batman Begins, and we will engage questions of morality in war, and the difference between what is in our hearts and what shows on the outside.
Posted by Nick Lannon at 10:03 AM