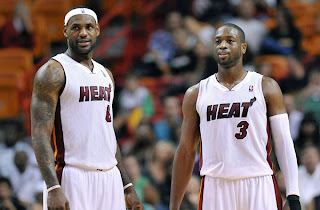 This post may not age well.  I'm writing it on June 7, 2011, the day of game 4 of the NBA Finals.  The Lebron James- and Dwyane Wade-led Miami Heat enjoy a 2-1 game advantage over the Dirk Nowitzki-led Dallas Mavericks.  Readers who know the outcome of tonight's game and of the series may consider the observations made here to be hopelessly naive, or at least uninformed.

But here we go.

One of the main storylines of these NBA playoffs, if not THE main storyline, is the leadership of the Heat.  Is it Wade's team?  LeBron's?  Who is the alpha dog?  As is common in sports journalism, the Batman and Robin tandem is used as an illustration.  For instance, Michael Jordan was Batman, while Scottie Pippen, his "sidekick," was Robin.  Jordan's superiority is unquestioned. 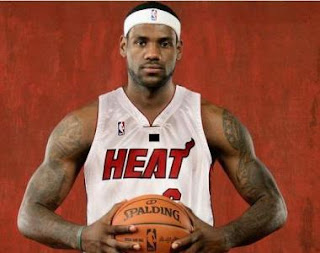 LeBron's deference to Wade in the fourth quarter of the first three Finals games has been reported as a kind of personal weakness.  Indeed, his decision to sign with the Heat at all, where Wade has spent his entire superstar career, is seen as an admission of "sidekick" status.  Skip Bayless, of ESPN, recently tweeted that "the biggest reason LeBron chose to join DWade was that LeBron knew DWade could win him rings. From that moment he was LeRobin James."

I don't want to write a sports column here.  For the record, it seems to me that the Heat are a two-leader team.  Maybe we've never seen it before, and we've been told that it can't work, but I think we're seeing it now.  What is interesting to me is that we have a need to place people on a scales.  Who is better?  Who is the leader?  Who is Batman and who is "only" Robin?  We do this because of what the Reformer Martin Luther called the theology of glory.  Human life is naturally a quest for glory, and to that end, we have to stack ourselves against everyone else.  Even if we are acknowledged to be the best, we are stacked against the weight of history.  If LeBron is the best player today, is he better than Jordan, Bird, or Russell?  And if that weren't heavy enough, there is the most nefarious comparison of all:  Is LeBron James AS GOOD A PLAYER AS HE OUGHT TO BE?  Truly, as Luther said, the quest for glory cannot be satisfied.  It must be extinguished. 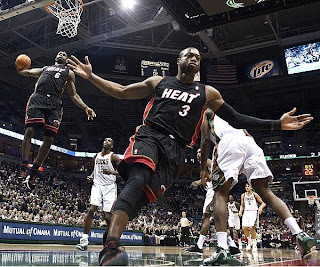 And this, at least outwardly, is what LeBron James has done.  He has accepted a "Robin" role (or at least accepted everyone calling it that) for the betterment of the team.  He has extinguished his quest for glory.  And thereby, he has come to the precipice of his worldly glory, an NBA championship.

For Christians, when we acknowledge that our quest for glory (Christ-likeness) has been extinguished, we can accept the glorious salvation that is given to us freely, through no accomplishment of our own.  Where LeBron defers to Wade, we defer to Christ, who plays the game better than we ever could.
Posted by Nick Lannon at 2:27 PM