Thoughts on Some Scary Movies

I watched The Strangers the other night...very scary. I tend to not be afraid of monster/supernatural horror movies...I'm more afraid of things that might happen to me. That said, as I made the list below, there is an embarrassing supernatural horror movie on there. Oh well. Anyway, below is a list of movies that have scared me, either in the theater, or walking home afterwards...

The Strangers
Three home invaders terrorize a young couple in a rural home. That's it. I think the movie goes a little far with what people could actually do (at one point, we see the boyfriend get physically touched on the shoulder while leaning into his car in the driveway, and when he turns around, no one is there...) but it's scary as heck. We never see the villains' faces, even when they take their masks off to make the final kill. The girlfriend asks, "Why are you doing this to us?" And one of the home invaders, almost puzzled, responds..."Because you were home." Jeez...

Scream
Sort of a funny one. I saw this in my campus movie theater while in college, and really enjoyed it. It's not particularly scary, although it fits my "Things-That-Could-Actually-Happen" Corollary. It wasn't until I was lying in my bed late that night that I started to get scared. It's a little embarrassing to be afraid of Skeet Ulrich and Matthew Lillard (although not the most embarrassing thing on this list...) but I couldn't help myself. Freaky kids with no compunction? Scary. 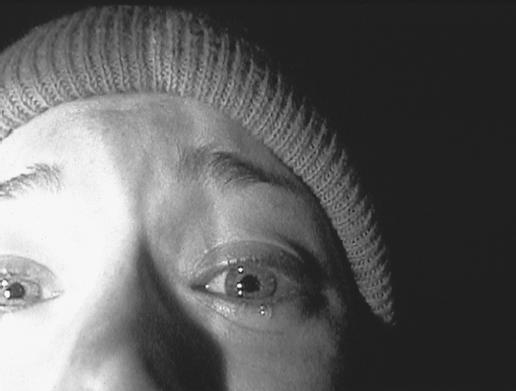 The Blair Witch Project
I talked about the Blair Witch in my Greatest Movie Villains discussion. This movie is scary. If you can handle the shaky-cam business, which I blessedly have never had a problem with, this one will make your hair stand on end. It's just three kids lost in the woods...and scary stuff starts happening at night. Aren't we all already afraid of this? Also, this movie has one of the greatest endings of all time. Even years after seeing it, I would RUN from my car to my apartment if I got home too late at night. And this was when I lived in the desert. But hey, maybe the Blair Witch is a snowbird. The Craft
Okay, this is the really embarrassing one. Scared by Neve Campbell, Robin Tunney, and Fairuza Balk? Well, Fairuza Balk maybe. But the idea of four sexy teens who accidentally get wrapped up in the truly dark arts is just too humorous to be scary, right? I mean, the unintentional comedy potential is huge. But when the lights came up in the theater, and I tried to stand up and leave, I realized that my legs ached...from my muscles having been clenched THE ENTIRE TIME. It's the Me, Myself, and Irene Corollary: You must trust your body when judging a movie. I didn't think I particularly liked Me, Myself, and Irene when I saw it in the theater, but as I walked out, I realized that my face hurt from smiling for 90 minutes straight. Must have liked it, right? So The Craft? Must be scary. 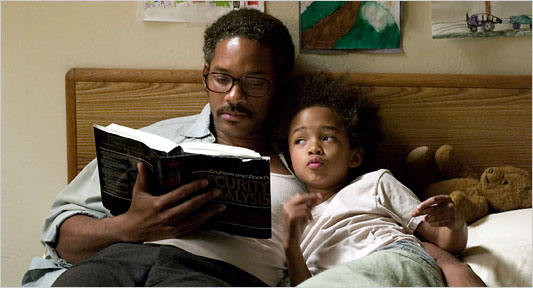 The Pursuit of Happyness
Now, I know this is not supposed to be a scary movie. In fact, quite the opposite. It's a triumph of the human spirit. But the idea that a competent, intelligent family man can end up homeless...that's something that I (hopefully irrationally!) worry about all the time! When we find Will Smith sleeping in a San Francisco subway station, that's just as scary as when Tom Skerritt turns around in the ventilation shaft and the alien is right there. And I'm terrified I wouldn't have the resourcefulness (like a great phone manner and the ability to solve a Rubik's Cube in five minutes) that Smith needs to get back on his feet. Triumph of the human spirit? Hardly. Abject terror? Definitely.

So what scares you?
Posted by Nick Lannon at 9:33 AM