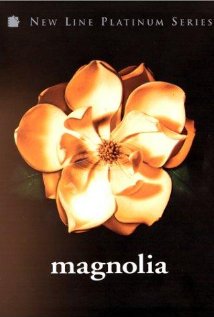 I've posted about Magnolia before, but this is a film that bears further examination. One of the most beautiful modern American films, this movie won no Academy Awards, and was only nominated for three (Tom Cruise for Best Supporting Actor, Aimee Mann for Best Original Song, and P.T. Anderson (who also directed) for Best Original Screenplay). Magnolia was released in 1999, so I'm going to assume that no spoiler alert is necessary. That said, if spoiler warnings are necessary, how have you not seen this movie? It's 188-minute running time is an impediment to some, but weren't you willing to sit through Braveheart (177 minutes)? Magnolia is an infinitely better film. Anyway, Netflix it, stream it, get it On Demand, whatever you have to do.

Magnolia is a composite picture of 24 hours in Los Angeles, inter-cutting between seven stories (Anderson famously protested, "Michael De Luca (executive producer) says I'm making a movie with seven stories! I'm making ONE STORY!"), investigating the humanity of the subjects and the way in which they might relate. It boasts some of the finest actors of generation (Phillip Seymour Hoffman, Jason Robards, John C. Reilly, Julianne Moore, William H. Macy, Phillip Baker Hall, Alfred Molina, and the list goes on...) giving some of their greatest performances. The opening sequence is one of the most brilliant ever written or executed. Watch (there is one f-word, so NSFW, and if you're going to be offended, don't watch at all):
Surely, the narrator asserts, these things can't just be "things that happen." Surely, "oh, it's just one of those things" isn't always a satisfactory response. Magnolia is a powerful argument for a divine being (specifically God of the Bible) who gets involved. The movie's story (or -ies, depending on whom you ask) and their interconnectedness could simply be written off as coincidence or "just one of those things..." until of course, a rain of frogs begins to fall. While the rest of the story is assuredly strange and improbable, a rain of frogs is beyond that. It's impossible. We would all agree that THAT is NOT part of the set "things that happen." That's NOT "just one of those things." That's an intervention from the outside.
And it's not just intervention for intervention's sake. It brings estranged people together, it knocks sense into people, and gives people purpose. It comes to those who are in need. And if these clues aren't enough, the Aimee Mann song for which she was Oscar nominated is called "Save Me." Further, the most powerful song of hers in the movie, "Wise Up," goes from, "It's not / What you thought / When you first began it / You got / What you want / Now you can hardly stand it though / By now you know / It's not going to stop / 'Til you wise up" to "It's not going to stop / 'Til you wise up / No, it's not going to stop / 'Til you wise up / No, it's not going to stop / So just...give up."
Did you get that? It goes from "Wise Up" to "Give Up." This is the call of the Christian. Recognize that without God getting involved (which he does, spectacularly), our wising up is sure to fail. It's only in giving up that we can be saved.
Posted by Nick Lannon at 1:37 PM