Frasier and the Spa of Death

Frasier is one of my all-time favorite television shows. In fact, I'd say it's in a tie with The Simpsons for sheer "any time it's on I'm watching it and I'll own all the DVD boxed sets for sure"-ness. In fact, since Frasier has been off the air for a while, I already own all the DVD boxed sets. Hmm...maybe it's about time to start at the beginning again. Frasier Crane (Kelsey Grammer) is a member of ever exclusive club in Seattle. So, the episode called "Door Jam" (Season 10, Episode 11) when he gets his even-more-snobby neighbor's invitation to a secretive establishment in his mailbox, he's driven wild by jealousy and desire. When he calls the place to find out what they even do, he's prompted to enter a secret code that he, of course, doesn't have. His brother (David Hyde Pierce) remarks, "The allure of La Porte d' Argent has increased ten-fold!" 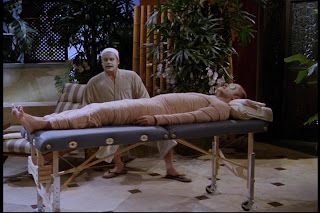 By pretending to be his neighbor, Frasier and Niles, his brother, gain access to La Porte d' Argent, which turns out to be a fabulous day spa. After an amazing afternoon of coddling, Frasier and Niles say, "I feel like I've been rubbed by angels" and "I've never felt better in my life." All of a sudden, they see a golden door, through which they are forbidden to go. "It's for our gold-level members only" they are told. Immediately, the wonder of the day turns to hatred. "Just how are we supposed to enjoy THIS?" wonders Frasier angrily. When asked what the place was like at home, he spits, "It was a hell hole!"
After trying everything to wrangle an invitation through the golden door, Frasier and Niles are having coffee with their friend Roz (Peri Gilpin), who chides them: "You only want to go in there because you can't. How much better can it be? And then, what if you do get in the gold door? What's next, the diamond door? And after that a titanium door? And after that a plutonium door?" Roz knows that there is no end to the human struggle, the human quest for achievement. For Christians, the analogy is our quest to get to God, or to at least become closer to him. There will forever be another door through which we must pass. 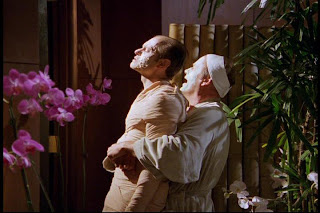 Of course, it turns out that Roz actually knows someone with enough influence to get Frasier and Niles through the gold door, and it turns out that she's wrong. The gold-level spa is SO much better than the silver-level spa. Frasier describes the "relaxation grotto" to his brother like so: "It's just paradise. From the rare, exotic orchids to the perfectly bubbled stream to the..." and then he sees it. "There's a platinum door." When Niles wants to go through the unguarded door, Frasier cries, "This is heaven! Right here and now! Why do we have to think about someplace else!" Niles retorts, "This is only heaven for people who can't get in to the real heaven...the PLATINUM heaven!" Finally, Frasier wonders, "Why can't we be happy?"
Frasier goes over to the platinum door, to take a peek through it, but just then, an employee of the spa comes into the relaxation grotto: "You're not allowed through there...please remain in the relaxation grotto." And with that, the relaxation grotto becomes an intolerable prison: "Please remain in the relaxation grotto?" grumbles Fraiser. "Have crueler words ever been spoken?" Rules create the desire to break them. We put our satisfaction out of our reach on purpose, so that we can later congratulate ourselves for achieving it, not thinking that we'll just do the same thing again and again. We do this with our relationship to God. 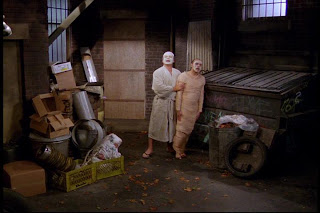 So finally, Frasier and Niles go through the platinum door, and the truth is revealed to them. There is no platinum-level spa. They are outside, with the dumpsters and garbage, locked out of the spa altogether. For us, we can say that there is such thing as a "close enough" relationship to God. We would all affirm this, and yet we all chase this mythic state. Like Frasier and Niles realized too late, the profundity of the Gospel is that we are in the best place (a perfectly justified relationship with our Creator, mediated by the blood of Jesus Christ) already! There is no improving on this relaxation grotto. Let's stop trying so hard and enjoy the rare orchids, the bubbled stream, and the beauty of a God who promises to be with us wherever we go.
Posted by Nick Lannon at 2:36 PM