Imputation and "The Cooler" 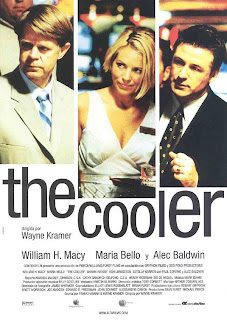 The word "imputation" is the best attempt to translate into English a Greek word that means things like "regard," or "attribute," or "accredit," or "credit." In a nutshell, it boils down to something like "the treatment of something as having attributes that it does not intrinsically have." Simple, right? At a recent conference, C. FitzSimons Allison (retired Episcopal Bishop of South Carolina) asserted that all of Christian theology, and the very Good News itself, hangs on this word.

But let's talk about The Cooler. William H. Macy plays the unluckiest guy in the world, who works for a Las Vegas casino, cooling tables. He is so unlucky that his unluckiness exudes out of his pores and infects those around him. Winning streaks become losing streaks, hot streaks become cold streaks, and good rolls become bad ones. One day, though, he does a favor for cocktail waitress Maria Bello, and things begin to change. She starts to have feelings for him, and consequently, he begins to be less unlucky. In a sense, she treats him as though he is desirable, when he is clearly not. Then, because of this attribution, he becomes desirable.
But here's the thing: Only God imputes. The Cooler is a good example, actually. Maria Bello begins to treat William H. Macy as desirable for only one reason: she loves him. There is no ulterior motive. Of course, she's a character in a movie, so she's immune to the vagaries of human nature to which the rest of us are beholden. We, on the other hand, hear about imputation and we think, "Great! I'll treat all the un-loveable people in my life as love-able, and they'll actually become love-able! Won't it be great!"

Christians sometimes fall into talking about grace in this way: Treat someone graciously and good things will happen. As you can see, though, this turns into just one more law to follow, an iteration of Love Your Neighbor as Yourself. And, of course, since it moves under law, it becomes something that our inevitable ulterior motives taint. "If I'm nice to her, maybe she'll be nicer to me!" Imputation is something that happens, like in The Cooler, automatically. Maria Bello isn't looking for something from William H. Macy...she falls in love with him. The classic human example, the incontrovertible fact that we are inevitably attracted to the person who loves us when we feel unlovable, still feels (and is) like a lightning bolt out of heaven: a pure miracle.
So if the bad news is that only God imputes, the good news (I should say Good News) is that GOD IMPUTES! In the same way that William H. Macy becomes the person Maria Bello regards him to be, we become the kind of people that God regards us to be. In this case, Fitz Allison is absolutely correct: All of Christianity hinges on this word. "For our sake he made him to be sin who knew no sin, so that in him we might become the righteousness of God" (2 Cor. 5:21). We are regarded as righteous when we are not, and are therefore MADE RIGHTEOUS. And that is Good News indeed.
Posted by Nick Lannon at 11:08 AM