So I Finally Saw "Avatar" 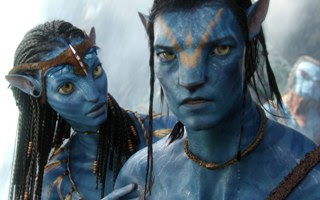 There are many things to like about Avatar, and many things to dislike. Ultimately, it's not that great a movie. The story is profoundly formulaic, and terribly predictable. The photography (whether real or CGI) is wonderful. I saw it in IMAX 3D, which is worth the extra money, I think. Without the IMAX 3D, it's just a computerized movie in which you can see every plot turn coming a mile away.
Much has been written about this movie, and most of the writers are more thoughtful than I am. David Brooks wrote an interesting piece about it in the New York Times. His argument is that the film is ultimately insulting to the very populations it purports to support. Can I say that? "Purports to support?" Anyway, the idea of an American being a better Na'vi (the alien locals) than the Na'vi themselves is what seems insulting. In fact, ultimately, they can't win without him! Brooks calls it the White Messiah Complex. The idea is that the peaceful, at-one-with-nature Na'vi (read: American Indians) need the "White Messiah" (read: Kevin Costner) to come and save them. So this is a quasi-religious thing that might be worth talking about in the blogosphere. But to me, the more interesting thing than the Dances with Wolves aspect is the at-one-with-nature aspect. 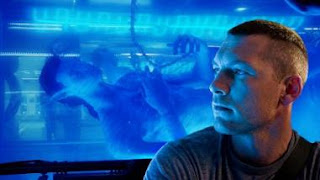 The goddess of the Na'vi is called "Eywa" and is described in the movie as "the combined energy of all living things." The Na'vi are able to connect with Eywa by connecting to nature. I'm less concerned with the pagan (in the purely adjectival, non-pejorative sense) aspects of the Na'vi religion than I am with the power of Eywa. Sigourney Weaver plays a woman who is studying the Na'vi, falls in love with them, and is injured defending them in battle with the humans. She is mortally wounded, and the only chance for her to survive is for the Na'vi to ask Eywa to transfer her soul into her avatar, the genetically engineered remote body she's been using. Got it?
So the two bodies, Weaver's and her avatar's, commune with nature, but the process doesn't work. The transfer doesn't happen. The Na'vi priestess basically says that her wounds were too great. She was too far gone. Eywa tried to save her but failed.
And there you have it. Eywa is too weak! This God can't bring Weaver back from the dead. Ultimately, that's the problem with earth- (or Pandora-) based deities: They are bound by natural laws! The God of Christianity specifically raises people from the dead. The argument of the Bible is that death must come before true life can be had. Jesus said that, in order to be his servants, we must take up our cross and follow him. In other words, we must die. Eywa can heal wounds, but she cannot resurrect. She IS nature, she is not above it. I'm glad to worship a God who created nature, is not defined by it, and who can therefore supercede it.
Posted by Nick Lannon at 2:30 PM