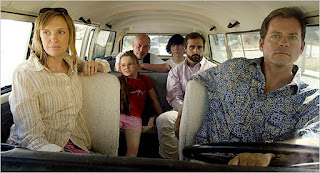 With one of the indie hits of 2006, Jonathan Dayton and Valerie Faris (directors) and Michael Arndt (writer), introduced us to the quirkily disfunctional Hoover family. In Little Miss Sunshine, it is little Olive (Abigail Breslin) who drives the plot. She is seven years old, and is invited to participate in the Little Miss Sunshine Pageant in Redondo Beach, CA. The trick is, the family lives in Albuquerque, is poor, and nobody trusts anybody enough to leave anybody behind. So they all pile into the family's VW bus and hit the road. The driver is patriarch Richard (Greg Kinnear), purveyor of a self-help Nine Steps to something book. His wife, Sheryl (Toni Collette), doesn't have a trait to pigeon-hole her, but she's the manic glue that holds the family together. Sheryl's brother, Frank (Steve Carrell), is fresh off a suicide attempt and may or may not be the world's preeminent Proust scholar, depending on who you ask. Richard's father (Alan Arkin, who won an Oscar for the performance) is along for the ride, too, having been kicked out of his retirement home for lewd behavior and rampant cocaine use. Completing the family constellation are Olive, the would-be pageant queen, and Dwayne (Paul Dano), a Nietzsche-reading sulker who, in his own words, "hates everyone." Quite the rogue's gallery.


A family such as this is certainly ripe for conflict, and much conflict arises on their two day trip across the Southwest. The particular conflict that I want to focus on today is Richard's conflict with his family over his Nine Steps. Fundamentally, the Nine Steps are like any self-help program: They posit a capability inherent in everyone and then attempt to teach you to access it, and then to use it, to achieve your life goals. Richard has drunk his own Kool-Aid to the point that when Frank comes to their house from the hospital, he explains to Olive that Frank "gave up on himself, which is something winners never do." As you might imagine, all the winners vs. losers talk around the home has alienated his son, pushed away his father, and brought his marriage to the brink of divorce. And then, in the ultimate indignity, Richard himself is shown to be a loser, when the book deal he's been counting on falls through.

The losing ways of the Hoovers are brought into sharp relief by the filmmakers upon their eventual arrival at the Little Miss Sunshine Pageant. It is immediately obvious that Olive, sweet, precocious and talented as she is, is no beauty queen. There is a quiet push from the family, now closely bonded together due to the harrowing experiences they've shared on the road, to pull Olive out of the pageant.

Ultimately, Olive herself is asked what she'd like to do. She's clearly intimidated by the other girls, and has never been more sure that she's fat, but she decides to go on anyway. As the family expected, she is woefully out of place, and that's never more apparent than in the talent portion of the competition. But, amazingly, when Olive fails spectacularly in her dance routine, the family runs up on-stage and joins her in the dance, embracing their collective loser-hood.

And really, that's what Little Miss Sunshine is all about. It's about a man, but really a family, who is so afraid of being a loser that he creates a system that "guarantees" winning. But the winning (a happy family) only gets created when the losing is acknowledged and embraced. We might draw the parallel to the Church's "law." The church attempts to create a "Nine Steps" to a good life, to happiness, by giving us all kinds of things to do. But the law can't make us good. In other words, its requirements don't give us the power to keep them. It's only in realizing that we're losers, and throwing ourselves on the never-ending mercies of Christ, that true winning--in him--is possible.
Posted by Nick Lannon at 9:12 AM