Tiger Woods is Getting Better and Getting Worse 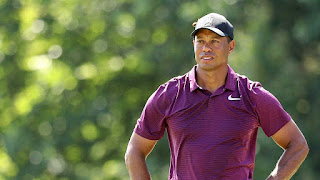 Tiger Woods finished fourth in a PGA tournament this past weekend.

Tiger's last win came in 2013 at the WGC-Bridgestone Invitational. His last major championship was the 2008 US Open. Shortly thereafter (Thanksgiving of 2009) Woods famously crashed his car outside his Florida mansion, was exposed as a serial cheater and sex addict, and began one of the most precipitous slides from public grace in the history of sports. But now, almost a decade—and a ton of public apologizing and image-burnishing—later, people are ready for Woods to be back.

The problem is, he just won’t seem to come.

For years, every time Tiger would enter a tournament, the speculation was rampant: could Tiger win? Could he drive the ball straight? Could he hit fairways? Could he putt? He would occasionally start a tournament well only to completely falter on the weekend (Gold tournaments are made up of four rounds, played Thursday through Sunday). There was a period where it seemed that if he wasn’t playing well, he’d feign an injury and withdraw from the tournament altogether. And then there were years in which he actually was injured, and hardly played at all.

Now that he’s back playing regularly, he is a regular topic of conversion, no matter how well he plays. After each tournament, commentators breathlessly ask themselves—whether Tiger’s performance was good, bad, or indifferent—what it means for Tiger’s future. Is he back? Isn’t he?

I’m reminded of the great Beatles song “Getting Better” (serious hat tip here to Paul Zahl, who references this song all the time) in which Paul McCartney sings, “It’s getting better all the time” and band replies, “Can’t get no worse!” This is certainly the story of Tiger Woods’ last decade…and it’s probably the story of your entire life.

“Getting better” is an appealing narrative. It makes sense to us. One of the reasons it makes sense is that it is a staple of fictional stories: books, movies, television shows; so many of the stories we watch and read are about characters who start at one place, go on a journey—whether internal or external, whether epic or minute—and end up somewhere else, usually improved. This makes us feel good, being the aspirational people we are. We want to go on a similar journey. We can all feel the discrepancy between who we are now and who we wish to be (to say nothing of the discrepancy between who we are now and who God wishes us to be!) and so we’re always looking for that metaphorical ladder to climb to get to where we want to go.

The ladder that “Getting Better” posits, though, is a mysterious one. In sense, it’s climbable: who amongst us can’t point to some area of improvement in their life with a hearty “Thank God!”? But this ladder has a pernicious habit: as we climb, the rung we’ve just clambered over disappears beneath us. Yes, it’s getting better all the time, but it also “can’t get no worse.” We’re always on the very bottom rung!

For every round Tiger Woods spends hitting every fairway, there seems to be a round during which his putter absolutely deserts him. For every cut he makes, there are a few he misses. And that’s totally glossing over perhaps his most profound truth: after every future tournament he might win, he goes home to a very different life than the one he was trying to live a decade ago. His wife is no longer his wife. His sins and predilections are public knowledge. Sure, it’s getting better all the time. He might even win another major one day. But it can’t get no worse, either.

This bifurcated state of affairs—our God-given improvements combined with the fact that we might fall off the bottom rung of the ladder at any moment—make the Good News of the Gospel all the more good. We have a God who, though helping us up the ladder, does not actually seem to regard our climb as anything to get excited about. No, he got excited about sending his son, Jesus Christ, down to the bottom of the ladder.  Jesus is there when we fall. Jesus is there when it can’t get no worse. Jesus is there when we’ve crashed our car into a tree outside our own house and our soon-to-be-ex-wife is bashing in the window with the very implement that made us famous. But she’s not trying to save us; she’s trying to kill us. Jesus, though, is there to save.

So. Is Tiger back? Well, yes and no. He’s playing better, that’s for sure. He’s steadily climbing the ladder back into contention. But…he could fall off at any moment. So could you. Rest, then, in the assurance that God is not waiting for you at the top of some ladder, really hoping you can make it all way. He didn’t wait. While you were crumpled in a desolate ball at the bottom, he sent his son to you. Sure, it’s getting better all the time, and it can’t get no worse. But for those of us who’ve fallen off and are now cradled in the arms of our suffering savior, it can’t get no better, either.